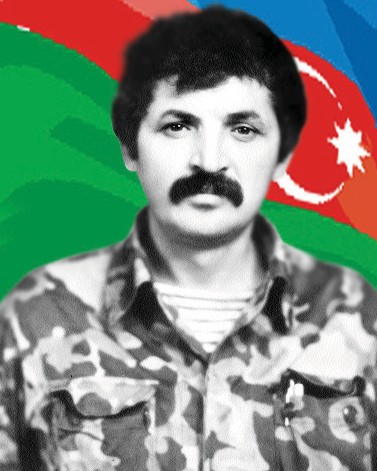 He was born on 27th of October in 1958 in Ganja city in the family of workers.

After finishing school # 18 in the same city, he was enlisted and had his military service in the Soviet army between 1976 – 1978. After some time, he graduated from School of Ensign in Orenburg and in 1990, Orjonikidze Agricultural Institute. Elbrus lived in Vladikafkaz, for a long time after graduating from the Institute.

Elbrus returned to Azerbaijan when the war had already emerged. He could not stand neither seeing the enemy invading our lands nor killing his compatriots. Therefore he voluntarily enlisted in the army to fight the enemy on 17th of May in 1992.

Lieutenant Elbrus Allahverdiyev was one of the first founders of Azerbaijani Armed Forces Artillery.

After organizing the first artillery battery in Aghdam combat zone, he was taking active parts in the battles as well. He had success in the battery battles. The first division was established on the basis of the battery and Elbrus Allahverdiyev was assigned as a commander of the division in June, 1992. He was taking an active part in all Division battles assignments and clearing the way for our infantry and military vehicles. In many crucial operations that were conducted by the Brigade, the artillery of the division destroyed many strategically important positions of the enemy by well – aimed shots.  The Artillery division of E. Allahverdiyev destroyed not only one cannon ball, and one large-caliber machine gun of the enemy in the battle nearby Avdur village, but also one rocket artillery unit  in the  battle that were taking place in Aghdere region, in September of 1992.  They kept destroying enemy military equipment in October of the same year as well.

Armenian armed forces started attacking and invading Aghdam region in July, 1993. The Artillery division was first to enter the battle.

The invaders were forced to retreat after a crushing artillery response.

The enemy forces again started to attack Aghdam region on 14th of June.  Armenians wanted to proceed in the direction of Shelli village.

But the artillery division of E. Allahverdiyev started firing at the enemy not letting them move forward. And the enemy once again was forced to withdraw from the battlefield.

On 16th of June, with another attack of Armenians, Lieutenant Elbrus Allahverdiyev took several soldiers from the artillery division and went to help the infantry. In this battle, he was severely wounded by a missile explosion.  Though the commander was immediately taken to the hospital, they were not able to save his life.

He was married and had three children.

Allahverdiyev Elbrus Haji was posthumously awarded the title of “National Hero of Azerbaijan” by the decree # 202 of the president of the Republic of Azerbaijan 1994 dated September 16.

He was buried in the Martyrs Alley in Ganja city. And one of the main streets in Ganja city nowcarries his name.