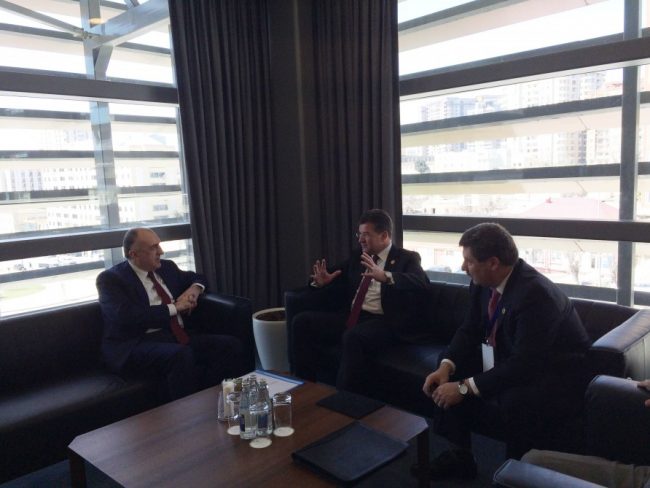 Azerbaijan’s Foreign Minister Elmar Mammadyarov met with Miroslav Lajcak, president of the UN General Assembly, on the sidelines of the Ministerial Conference of the Non-Aligned Movement.

Lajcak recalled his visit to Azerbaijan in 2010 as a foreign minister of the Slovak Republic and shared his positive impressions on the visit. He praised the development of Azerbaijan in all spheres during past years and expressed his satisfaction over visiting Azerbaijan again.

He further thanked the Government of Azerbaijan for hosting the Ministerial Conference of the Non-Aligned Movement at the high level.

The sides exchanged views on the Azerbaijan-UN relations and discussed prospects for further deepening of relations.

He also expressed Azerbaijan’s interest in expanding cooperation with UN specialized agencies and other bodies.

Lajcak noted that the UN attaches great importance to relations with Azerbaijan and highly appreciates the efforts of Azerbaijan to deepen relations with the UN and hosting global scale events, organized at the initiative of the United Nations.

The sides also exchanged views on the latest negotiations on the Armenia-Azerbaijan conflict. Mammadyarov noted that although relevant resolutions of the UN Security Council on the conflict demand the withdrawal of occupying forces from all occupied territories of Azerbaijan, Armenia does not comply with those demands and continues occupation of Azerbaijani territories by using force.

The agenda of the UN General Assembly, the successful implementation of the Sustainable Development Goals by Azerbaijan, and other issues of interest were discussed at the meeting.