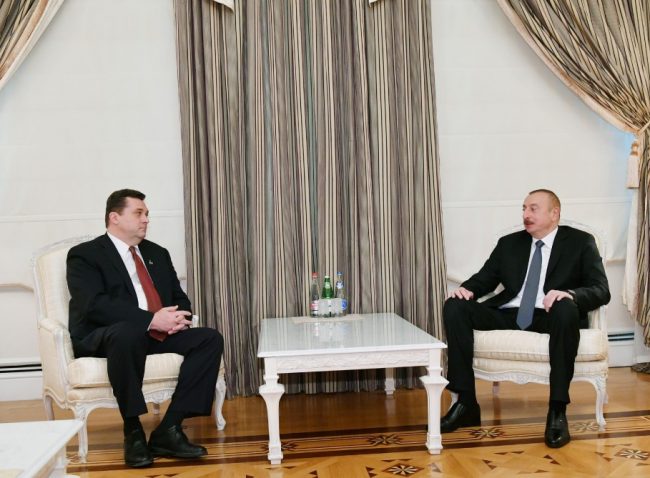 President of the Republic of Azerbaijan Ilham Aliyev has received Chairman of the Russian Union of Journalists Vladimir Solovyev.

The head of state noted successful cooperation between Azerbaijan and Russia in all areas, including between media representatives, and stressed the necessity of further intensifying relations in this field. In this regard, President Ilham Aliyev pointed out that regular reciprocal visits of media representatives of the Republic of Azerbaijan and the Russian Federation can contribute to increasing public awareness of the processes taking place in the countries. At the same time, the head of state said that such visits are important in terms of expansion of the bilateral ties, which are successfully developing. President Ilham Aliyev underlined that reciprocal visits and regular meetings of the presidents of Azerbaijan and Russia play a special role in strengthening the bilateral relations. The head of state expressed confidence that Vladimir Solovyev`s visit will contribute to the strengthening of cooperation in the field of journalism.

Chairman of the Russian Union of Journalists Vladimir Solovyev said he is very pleased with his meeting with President Ilham Aliyev. He noted that the bilateral relations between Azerbaijan and Russia are developing successfully and are at a very high level. Vladimir Solovyev emphasized that Russian culture and press are treated with great respect in Azerbaijan, and noted that all Russian TV channels are broadcast in the country. He said that Russian journalists intend to maintain constant mutual contacts with their Azerbaijani counterparts. In this regard, Vladimir Solovyev stressed the significance of a Memorandum of Cooperation signed between the Azerbaijani Press Council and the Russian Union of Journalists on November 19.