US adopts resolution on centenary of the Azerbaijan Democratic Republic 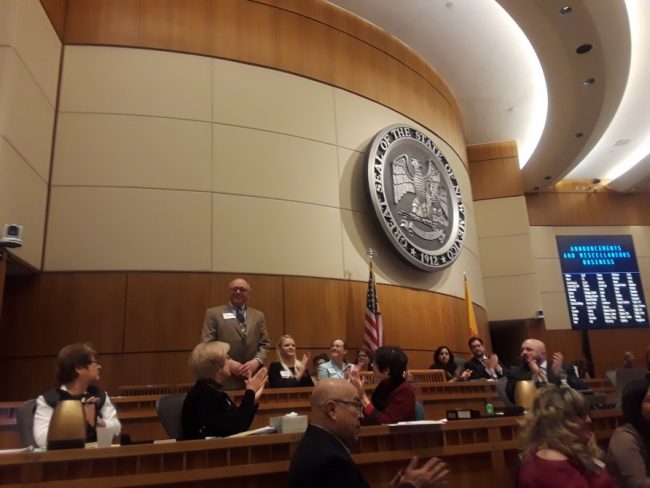 The House of Representatives of the State of New Mexico of the United States passed a resolution (memorial) on January 26, 2018, on the 100th anniversary of the establishment of the Azerbaijan Democratic Republic, the Consulate General of Azerbaijan in Los Angeles told AzVision.az.

Co-sponsored by several legislators, the resolution was passed unanimously at the plenary session of the House of Representatives.

The resolution notes that the first secular democratic republic in the Muslim world – Azerbaijan Democratic Republic – was established in 1918, which “enacted many progressive reforms, including granting the right to vote to women in 1919, which made Azerbaijan not only the first majority-Muslim nation to empower women, but it also put the country ahead of many advanced nations at the time in championing women’s rights.”

The document stresses that having restored its independence in 1991, Azerbaijan “has consolidated its freedom and independence and has become one of the world’s fastest developing and modernizing countries, the largest economy of the region and the biggest trade partner with the United States in the South Caucasus.”

It further mentions that the United States was one of the first countries to recognize the Republic of Azerbaijan and establish full-fledged diplomatic relations with it and notes that Azerbaijan’s sovereignty, independence and territorial integrity is recognized and supported by the US and the United Nations.

Speaking of the US-Azerbaijan relations, the resolution emphasizes that both countries “have expanded their partnership and developed multi-faceted cooperation on issues ranging from energy security, the nonproliferation of weapons of mass destruction, the fight against international terrorism and drug and human trafficking.”

It states that “Azerbaijan was one of the first countries to render comprehensive and unconditional assistance to the United States immediately after the terror attacks of September 11, 2001, opening its airspace and airports for use by coalition troops in Afghanistan and sending its soldiers to serve shoulder-to-shoulder with American troops.”

The document commends Azerbaijan’s contributions to the energy security of the United States, Europe and Israel. It also indicates that “it is critical for the United States to continue to further support the freedom and independence of its allies, such as Azerbaijan, and strengthen relations in order to advance the common interest now and in the future.”

In conclusion, the House of Representatives congratulates the Republic of Azerbaijan on the 100th anniversary of the Azerbaijan Democratic Republic, and reiterates a firm support for Azerbaijan’s independence, sovereignty and territorial integrity within its internationally recognized borders.

It further resolves that the copies of the resolution will be presented to US President, President Pro Tem of the US Senate and Speaker of the US House of Representatives as well as to the members of the New Mexico congressional delegation.