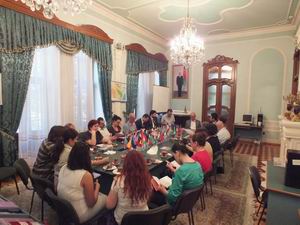 The translation laboratory of Heydar Aliyev Heritage Research Center held a conference devoted to the International Day of Translators.

While speaking at the conference professor of the University of Languages, Qilincxan Bayramov stated that though in the Soviet period translation mostly covered the fiction, in the period of independence covers political, economic and diplomatic fields, as well “azadinform” reports. He assessed the activity of Heydar Aliyev Heritage Research Center in training the young translators as a commendable work.

French Literature and Art Commander, holder of the order, writer and translator Hamlet Goja in his speech at the conference stressed the significance Center in informing the world community about the realities of Azerbaijan. He wished the Center successes in its future activity.

Research fellow of the Institute of Folklore of the Academy of Sciences of Azerbaijan Rza Khalilov focused the attention on the traditions and experience established in the sphere of the Arabic and translations of Arabic in Azerbaijan. He highly appreciated the work of Center in the virtual space.

Chinese translator, professor of Baku State University Lee Jen, the Ukrainian translator Irina Aliyeva , the Georgian translator, director of the department of “Art and Literature” of Public Television and Radio Broadcasting Company Imir Mammadli and others expressed their pleasure from cooperation with the Center and stressed the significance of holding such conferences frequently.