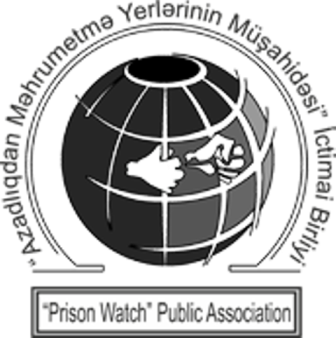 “Prison Watch” Public Association held monitoring of penal facility No. 15 of high regime with the assistance of Justice Col.-Lieu., Gasim Aliyev – deputy chief of the facility on operative regime issues.
It was revealed during the monitoring that 795 convicts served sentence in the facility on the monitoring day. 76 of the jailed persons are educated on the specialities of plasterer, dyer, metal locksmith, electrician and carpenter. 54 inmates work in the table producing workshop functioning in the jail. Besides, some convicts were engaged in individual labour (rosary manufacture). 12 inmates work in the economy brigade. 83 inmates are kept in the hospital.
During the monitoring, 27 convicts were held in the penal cell of the facility: 7 – in cell-type rooms, while 20 – in penal rooms. 11 convicts were placed under quarantine.
The conditions of the jail’s long-term meeting rooms meet necessary requirements. The state of the short-term meeting rooms is also satisfactiory.
Although the jail’s library has over 7000 books, it is not supplied with seats and tables for reading. The jail’s club is rather small, but ts state is quite normal. The praying room is satisfactory. Special water-taps, built in original architectural style, are installed in front of the praying-room for ablution before prayers.
Except for the I group, consisting of the disabled and elderly convicts, the capacity and state of the hostels of the II, III, IV and V groups are similar. However, one of the VI group’s hostels is smaller (36-setaed) and more comfortable. The bath-house and toilet of the VI group’s hostel is better repaired than those of other groups and sanitary conditions are good in one toilet of the I group’s hostel. Though the toilet of the I and VI groups’ hostels is good, the bath-houses and toilets of the II and III groups, tolilets and wash-stands of the IV and V groups are kept unclean. The ventilation system in the hostels of the II and III groups is good, but the hostel of the V group has no ventilation system. There are no informative name-plates on any of the convicts’ beds in the hostels. The condition of the laundry can be considered as satisfactory. Besides, the single-seated barber’s room is narrow.
12 convicts were treated in the medical unit during the monitoring. The wards of the medical unit and its sanitary arrangement are in the poorest condition.
The situation in the canteen, kitchen and self-service kitchen is satisfactory while the maintenance of the dishwashing place is not pleasing. Along with the unpleasant smell, there are dozens of flies in the food store.
The asphalt cover of the facility, as well as its general maintenance is bad (except for the administrative building) either. Water supply is normal all over the jail.
The state of the bath-house of common use is satifactory. The keeping conditions of those placed under quarantine are unpleasant. The air in the penal cell is fresh. However, water-tap is unsuitable in one of the cell-type rooms.
The inmates working in the factory are not notified about their wage rates.