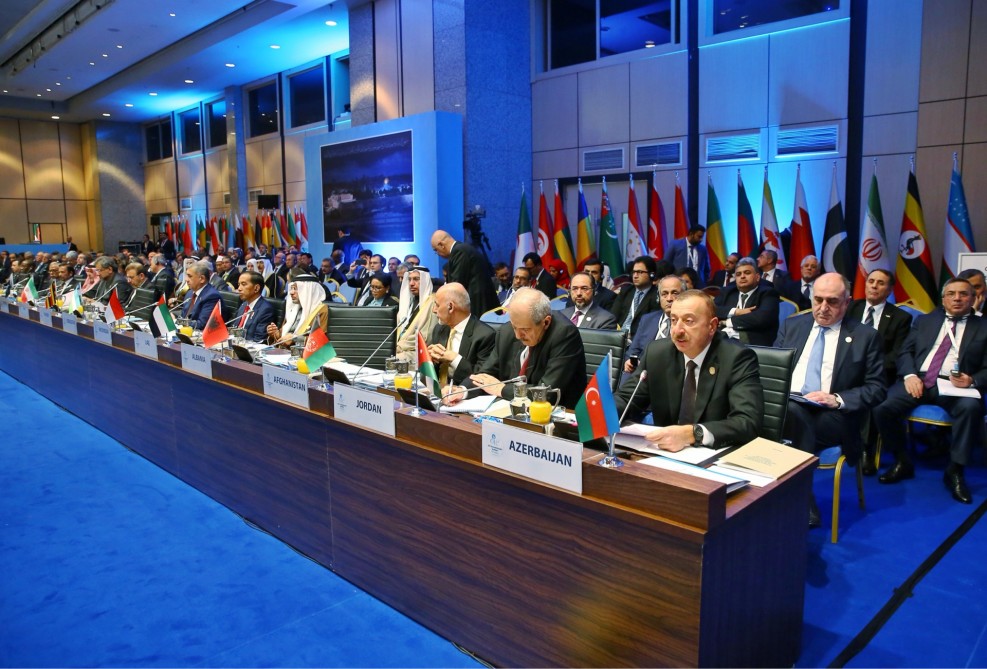 The summit under the motto “Unified Action in Solidarity with Al-Quds” brings together heads of state and government from around 50 countries.

Prior to the summit participants posed for official photos.

The event started with the recitation of ayahs from Holy Quran.

President of the Republic of Turkey Recep Tayyip Erdogan made opening remarks.

President of the Republic of Azerbaijan Ilham Aliyev then made a speech.

– In the name of Allah, Most Gracious, most Merciful.

Dear President of the Republic of Turkey, my dear brother Recep Tayyip Erdogan,

Participants of the Summit!

First of all, I would like to thank President Erdogan for organizing the extraordinary Islamic Summit. The Summit, being held on the initiative of President Erdogan, is yet another embodiment of the contribution Turkey is making to the cause of Islamic solidarity.

The decision of the President of the United States of America to recognize the city of Jerusalem as the capital of Israel and to transfer the US embassy to this city runs counter to international law and UN Security Council resolutions and is of great concern to us. This decision can have an adverse impact on the cause of a just and comprehensive settlement of the Palestinian-Israeli conflict and have dangerous repercussions in the Middle East. We believe that the United States of America should reconsider this decision.

Azerbaijan consistently supports the peaceful settlement of the Palestinian-Israeli conflict on the basis of the principle of two states with East Jerusalem being the capital of the State of Palestine. A few years ago, with the aim of helping the State of Palestine, Azerbaijan hosted a constituent conference of the Islamic Financial Safety Network and a donor conference in support of the development of the city of Jerusalem. In July 2017, an international conference on the issue of Jerusalem was held in Azerbaijan with the participation of the UN Committee on the Exercise of the Inalienable Rights of the Palestinian People, the United Nations Coordination Office for Humanitarian Affairs, the OIC, and various non-governmental and civil society organizations. The conference adopted a statement condemning the occupation of East Jerusalem and the restrictions imposed on believers performing their prayers in the Al-Aqsa Mosque. Today, as always, we stand by the Palestinian people.

Azerbaijan is making a tremendous contribution to the cause of Islamic solidarity. We are an active member of the Organization of Islamic Cooperation. At the initiative of Azerbaijan, the OIC Youth Forum, the OIC Labor Center and the Association of Journalists of OIC member-states have been established. Year 2017 was declared a Year of Islamic Solidarity in Azerbaijan. Azerbaijan is at the forefront of countries that are actively fighting Islamophobia. In 2017, Azerbaijan hosted the Fourth Games of Islamic Solidarity. This grand celebration of sport, friendship and brotherhood has once again demonstrated to the whole world that Islam is the religion of peace, mercy and equality.

Another possibility for strengthening cooperation and mutual support will be the forthcoming international conference due to be held in Baku this month. It will mark the fact that this year has been a Year of Islamic Solidarity.

I would like to take this opportunity to express my gratitude to the OIC, its member-states and Muslim communities in the world for their fair support of Azerbaijan in the settlement of the Armenia-Azerbaijan Nagorno-Karabakh conflict. For more than 20 years, Armenia has been holding 20 per cent of the lands of the Republic of Azerbaijan under occupation, including the Nagorno-Karabakh region and seven adjacent districts. Nagorno-Karabakh is native and historical part of Azerbaijan. As a result of Armenia’s aggression, more than a million Azerbaijanis have found themselves in the position of refugees and internally displaced persons. The occupied territories were exposed to complete ethnic cleansing and looted. Armenia has destroyed all cultural monuments there, including mosques and Islamic monuments.

Along with this, Armenia wants to build friendly relations with various Muslim countries. This is the greatest hypocrisy ever. Muslims of the world should know that Armenia, which has destroyed our sacred mosques, cannot be a friend of Muslim countries.

In 1993, the UN Security Council adopted four resolutions calling for an immediate, complete and unconditional withdrawal of the Armenian armed forces from Azerbaijani lands. However, Armenia refuses to fulfill them. The Organization of Islamic Cooperation and other international organizations have adopted similar decisions and resolutions. Azerbaijan will never put up itself with Armenian occupation. The conflict must be resolved exclusively within the framework of internationally recognized borders and territorial integrity of Azerbaijan.