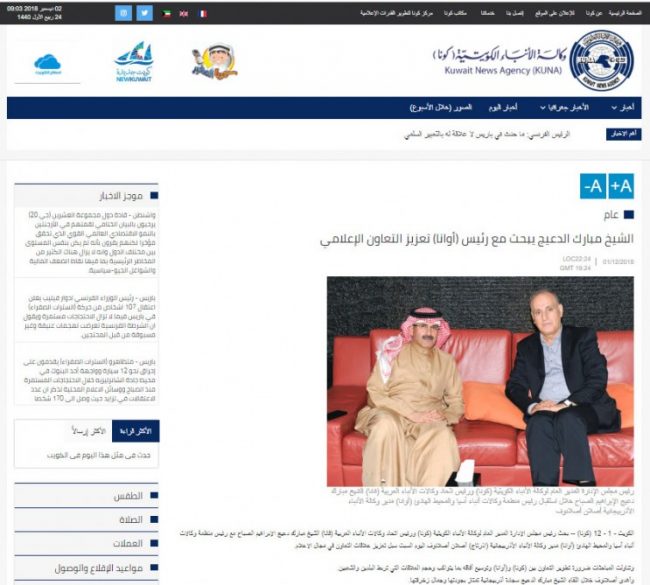 Sheikh Mubarak, also board chairman and director general of Kuwait News Agency (KUNA), deliberated with Aslan Aslanov, also chairman of the board of Azerbaijan State News Agency (AZERTAC), expanding cooperation between KUNA and OANA to live up to the distinguished relations between the two nations.

During the meeting, Aslan Aslanov offered Sheikh Mubarak a memorial gift: a carpet and two books. One of the books highlights the Baku-hosted fifth News Agencies World Congress, which was attended by the Azerbaijani President. The book features congress material in Azerbaijani, English and Russian languages, includes speech of Sheikh Mubarak. The second book includes photos provided by world news agencies, including KUNA.

In a statement to KUNA following the meeting, Aslan Aslanov expressed pride of the strong friendship bonds between Azerbaijan and Kuwait.

Aslan Aslanov, who arrived in Kuwait to attend FANA’s 46th General Assembly, underlined the importance of such of meetings in developing media sector in both countries to cope up with the rapid shift from conventional to technology-based media.