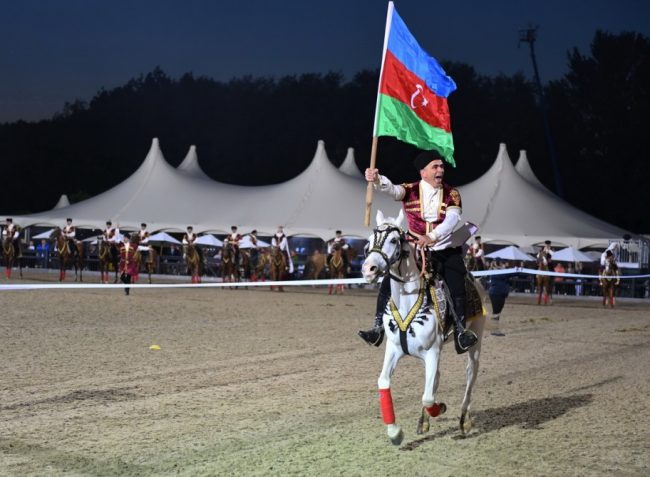 Royal Windsor Horse Show has featured an exciting performance of the Equestrian Federation of Azerbaijan. The federation returns to Windsor, having previously performed at Her Majesty The Queen’s 90th Birthday Celebration in 2016, with their new stunning performance “Land of Fire – Azerbaijan”.

Azerbaijan’s participation at Royal Windsor Horse Show was co-organised by The European Azerbaijan Society (TEAS) and the Azerbaijan Equestrian Federation, and supported by the Ministry of Culture and Tourism of Azerbaijan.

The display celebrated the Karabakh horse, the native horse of Azerbaijan. Horse and rider combinations combined fast paced movements with tight turns and perfectly timed executions. They were accompanied by the ‘Sarhadchi’ dance ensemble who performed traditional dances alongside fire-jugglers performing a spectacular fire show. The performance, choreographed specifically for Royal Windsor Horse Show, demonstrated the strength and bravery of the Karabakh horse, and the courage and peacefulness of the Azerbaijan people.

Azar Hamzayev, Land of Fire – Azerbaijan Coach said: “We are very excited to be returning to Royal Windsor Horse Show and to be showcasing a performance which captures our heritage, in front of the fantastic crowds. It’s a great opportunity to celebrate the Karabakh horse, and the traditional culture of Azerbaijan.”

Windsor Castle`s first encounter with the Karabakh horse dates back to 1956 when a Karabakh stallion called Zaman was presented to Her Majesty the Queen.