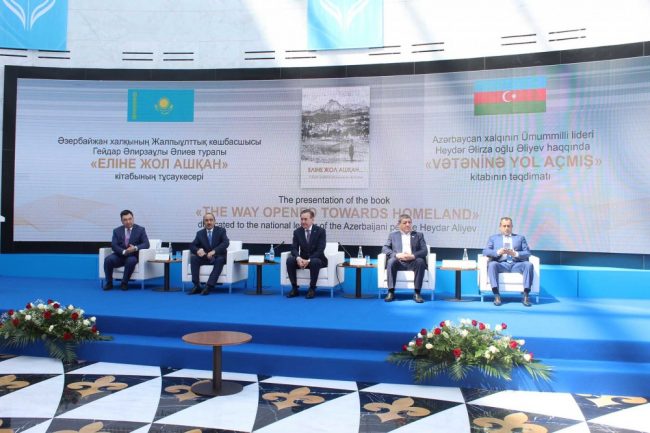 A Kazakh version of the book “The way opened towards homeland” on the occasion of the 95th anniversary of great leader Heydar Aliyev has been presented at the Library of the First President of Kazakhstan in Astana.

A joint work of the historians of Moscow State University named after Lomonosov, the book was translated from Russian into Kazakh language by the International Turkic Academy. Kazakh President Nursultan Nazarbayev, who was the closest friend of national leader Heydar Aliyev, wrote the foreword for the book.

In his opening remarks at the event, head of Chancellery of the President of the Republic of Kazakhstan, acting director of the Library of the First President of the Republic of Kazakhstan Makhmud Kasymbekov noted that the whole life of great leader Heydar Aliyev is connected with the history of the Azerbaijani statehood and the fate of the Azerbaijani people.

The Azerbaijani President’s Assistant for Public and Political Affairs Ali Hasanov thanked those who contributed to translating this valuable book about national leader Heydar Aliyev into Kazakh language. He noted that the book creates the opportunity to follow Heydar Aliyev`s life and political career.

Rector of Eurasian National University named after L. N. Gumilyov Yerlan Sydykov described the translation of the book into Kazakh language on the occasion of the 95th anniversary of Heydar Aliyev as a remarkable event.

The event also featured the screening of a documentary about national leader Heydar Aliyev.

In his interview with Kazakh media representatives, the Azerbaijani President’s Assistant for Public and Political Affairs Ali Hasanov thanked them for highlighting the event.