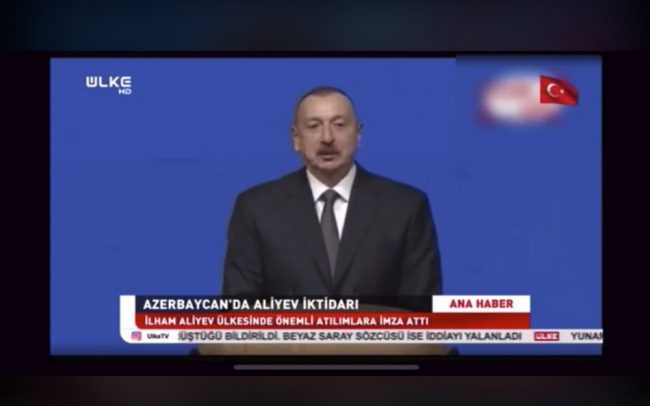 Turkey’s Ulke TV channel has broadcast a reportage on the presidential elections to be held in Azerbaijan on April 11, 2018.

The reportage highlights President Ilham Aliyev’s important statements made during his speech at the 6th Congress of the New Azerbaijan Party.

The reportage says that Ilham Aliyev, who was elected as a president in 2003 with vast majority of the Azerbaijani people`s votes, has always attracted the attention of the whole world.

The reportage stresses that over the past 14 years, Azerbaijan as a strong country has made great strides in economic and political spheres.

“Due to his resolute position, President Ilham Aliyev has achieved a number of successes towards the settlement of the Armenia-Azerbaijan Nagorno-Karabakh conflict.”

“President Ilham Aliyev attaches great importance to the development of economy and industry in Azerbaijan. Over the last 14 years, the Azerbaijani economy has tripled, the unemployment rate has dropped to 5 percent. Azerbaijan’s currency reserves have grown by 23 times. Along with the economic development of Azerbaijan, the army has also strengthened. The Azerbaijani Armed Forces, equipped with modern weapons, has liberated two thousand hectares of land overnight, which was under Armenian occupation,” the reportage says.

Concluding the reportage, the author mentions that there is a great confidence that Ilham Aliyev will win the presidential elections in Azerbaijan due on April 11.