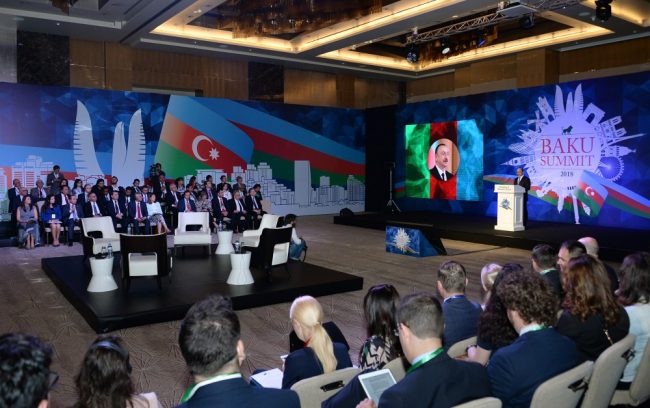 The Baku Summit of the Alliance of Conservatives and Reformists in Europe (ACRE) under the motto “Building a Shared Future” has kicked off in the capital of Azerbaijan.

The Summit brings together official from across Europe, MPs, public and political figures, scientists and businessmen, and representatives of non-governmental organizations.

The official part of the event featured a presentation on Azerbaijan.

Azerbaijani President’s Assistant for Public and Political Affairs Ali Hasanov then read out President Ilham Aliyev’s congratulatory message addressed to the participants of the Baku Summit of the Alliance of Conservatives and Reformists in Europe.

Addressing the event, First Deputy Speaker of Azerbaijan’s Parliament Ziyafat Asgarov emphasized the importance of addressing the challenges facing the world, and noted that the interparliamentary relations play a crucial role in this regard.

Ziyafat Asgarov also drew the audience’s attention to the Armenia-Azerbaijan Nagorno-Karabakh problem, underlining that the decisions and resolutins adopted by a number of international organizations on the settlement of the dispute must be fulfilled.

MP Gudrat Hasanguliyev, chairman of the United Azerbaijan Popular Front Party, which is a member of the Alliance of Conservatives and Reformists in Europe, highlighted causes and heavy consequences of the Armenia-Azerbaijan Nagorno-Karabakh conflict and the crimes committed nowadays by terrorist groups in the name of Islam.

President of the Alliance of Conservatives and Reformists in Europe, Vice-Chairman of International Trade Committee of European Parliament, Jan Zahradil thanked President Ilham Aliyev for the message addressed to the summit participants. He hailed the fact that the Baku Summit coincides with the 100th anniversary of the establishment of the Azerbaijan Democratic Republic, and described Azerbaijan as an important country. “Stability reigns here. This is a crucial factor for cooperation. Azerbaijan enjoys its worthy place in the world for its achievements and important role,” he said.

The summit continued with panel discussions.