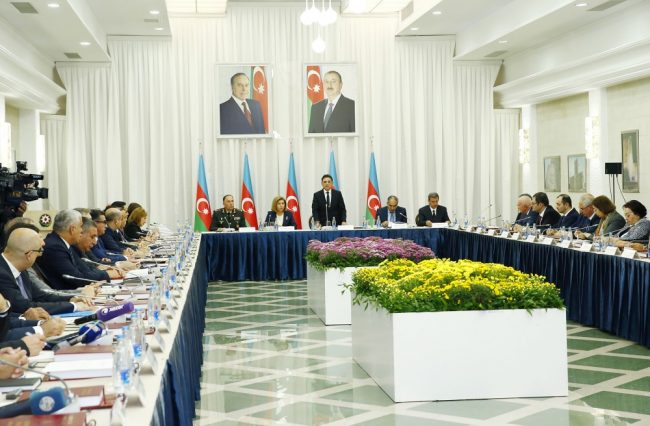 As a result of Armenia’s non-constructive position, the settlement of the Armenia-Azerbaijan Nagorno-Karabakh conflict is being delayed, Head of the Azerbaijani State Security Service, Colonel General Madat Guliyev said.

Guliyev, who is also the chairman of the Azerbaijan State Commission on Prisoners of War, Hostages and Missing Citizens, made the remarks at a meeting of the commission dedicated to the 25th anniversary of the commission’s activity in Baku on Nov. 1.

He stressed that Azerbaijani great leader Heydar Aliyev knew about the farfetched Nagorno-Karabakh problem since his work in the State Security Committee.

“Therefore, both during his work in Nakhchivan and Baku, he paid special attention to the fate of the Azerbaijani citizens who became victims of the conflict,” Guliyev said.

He stressed that after the great leader returned to power in the country in 1993, this issue was also a priority.

“The whole world knows that Azerbaijan has been subjected to aggression by Armenia,” Guliyev said. “Besides the state independence and territorial integrity of Azerbaijan are under serious threat, hundreds of thousands of our compatriots have become refugees and IDPs. Thousands of people are held hostage by Armenians today.”

He stressed that Heydar Aliyev always worried about the impunity of the war crimes committed by Armenia.

“Therefore, in the order, signed on March 1, 2001, he set before the state commission the task of carrying out purposeful and consistent work on updating the world community about documents on the genocide and ethnic cleansing policy against Azerbaijanis by Armenia, files about prisoners, missing people and hostages,” Guliyev added.

He added that Heydar Aliyev’s political course was successfully continued in Azerbaijan after 2003.

“The issue of war victims is one of the areas to which worthy successor of this course President Ilham Aliyev pays special attention,” Guliyev said.

“Thanks to cooperation with international organizations, in particular with the International Committee of the Red Cross (ICRC), 1,480 prisoners and hostages were released,” he added. “But according to the State Commission’s information, 871 Azerbaijani citizens are still among hostages and in captivity.”

“According to the information, Armenians tell prisoners and hostages that they “fully occupied Azerbaijan” and that “such a country no longer exists,” exert psychological pressure on them,” Guliyev said.

“Of course, Azerbaijan continues to take necessary measures to release these people and those detained in the occupied Nagorno-Karabakh region Dilgam Asgarov, Shahbaz Guliyev and Elnur Huseynzade,” he said.

“Azerbaijani President Ilham Aliyev focuses on the issue of the release of these people,” he added. “During the meetings and discussions the president always brings this issue to the attention of international structures.”

“Despite that ICRC put forward a proposal to release the individuals registered by the committee who are hostages and in captivity, to transfer prisoners and hostages to the parties [Azerbaijan and Armenia] as soon as possible, Armenia did not express its attitude to this humane proposal, remains indifferent to the fate of the victims of the war and takes no steps forward,” he said.

“The reason is that from the very beginning of the conflict, Armenia is trying to politicize the humanitarian issue and represent the separatist regime in Nagorno-Karabakh as a party to the conflict,” Guliyev said.