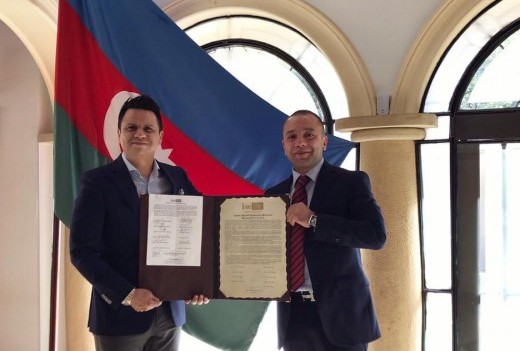 The Second Committee of the Colombian Parliament on Foreign Affairs, Security and National Defense has adopted a resolution supporting Azerbaijan’s fair position on the Armenia-Azerbaijan Nagorno-Karabakh conflict. The document was officially handed over to Chargé d’affaires of the Azerbaijani embassy in Colombia Hamid Zeynalov.

The resolution emphasizes the importance of bilateral relations between Colombia and Azerbaijan. The document highlights Colombia’s concern over the occupation of Nagorno-Karabakh region and seven adjacent districts of Azerbaijan as a result of Armenia’s aggression as well as over ethnic cleansing of Azerbaijanis in these territories. It also condemns Armenia’s aggression and calls on the international community to recognize those events as crimes against humanity.

In the resolution, the Colombian Parliament expresses its deep regret that the Azerbaijani territories are still under occupation and the Armenia-Azerbaijan Nagorno-Karabakh conflict remains unresolved. Colombia calls for peaceful settlement of the conflict within the norms and principles of territorial integrity and inviolability of internationally recognized borders of states, on the basis of international legal documents, as well as according to the relevant UN Security Council resolutions.

The resolution also demands the unconditional withdrawal of the Armenian armed forces from all the occupied Azerbaijani territories and the creation of conditions for the immediate return of Azerbaijani refugees and internally displaced people to their native lands.

The Second Committee of the Colombian Parliament on Foreign Affairs, Security and National Defense expresses its full support for all the efforts of the Azerbaijani government and people to defend their country.