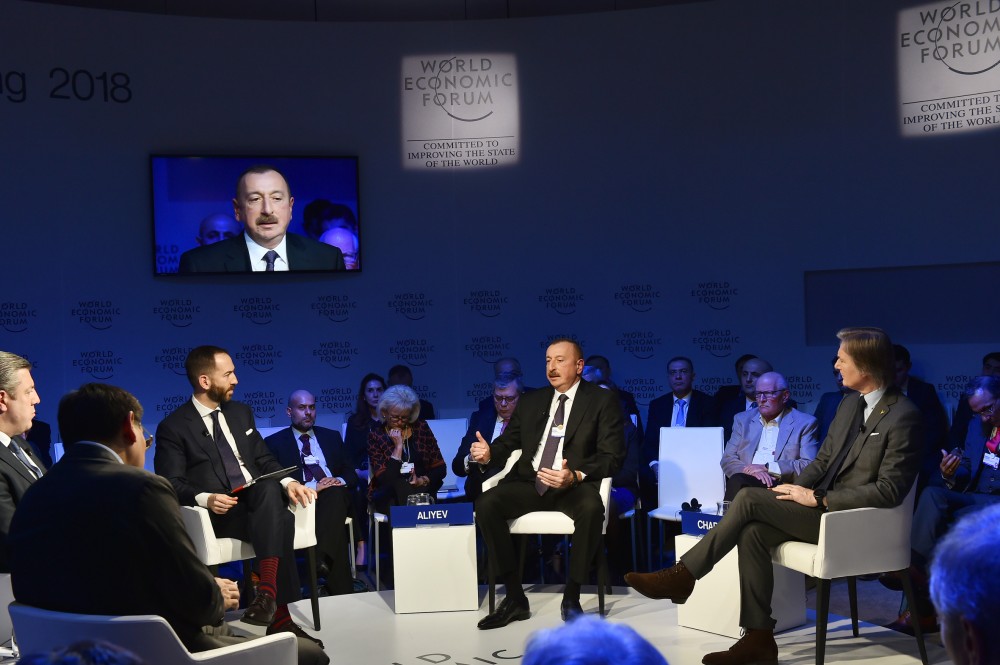 An interactive session on “Strategic Outlook: Eurasia” has been held in Davos as part of the World Economic Forum.

President of the Republic of Azerbaijan Ilham Aliyev attended the session.

The head of state made a speech at the event and responded to participants’ questions.

Moderator: President Aliyev, tell us, what is your outlook for Eurasia for the year ahead, and how will Azerbaijan navigate this very tense and now, quite dangerous neighborhood?

With every country of our neighborhood we have a very special format of cooperation. Our independence is young – only 26 years of independence. But I think Azerbaijan managed to establish itself as a truly independent country, which can afford to conduct an independent foreign policy, policy which is based on our national interests and which is not against interests of our neighbors.

So I think for a country, which is smaller than most of its neighbors, it is important to find this proper balance and to get advantage of the neighborhood because big neighbors mean big markets. And for us the best market is the market of our neighbors. Therefore, mutual interests, balance of interests, of course, non-interference with internal affairs of each other and a very pragmatic practical approach to cooperation in the neighborhood, I think, are one of the reasons for success of our country, one of the reasons for internal stability, and good prospects for the future.

Moderator: Mr. President, tell us a bit about Azerbaijan’s attempts to diversify its economy away from oil and gas.

President Ilham Aliyev: Diversification of economy is our main objective, and I think that we achieved good success in that direction. When we experienced a dramatic drop in oil prices I said in Azerbaijan that for us a post-oil period has already started, and we should forget about oil, forget about gas. Of course, we must implement completely the projects, which we are now implementing. But as a source of major income we should look at technology, innovation, industry, entrepreneurship, and agriculture. Therefore, we introduced very serious reforms, which already brought good results. Non-oil sector of our economy grew almost three percent last year, and non-oil industry almost four percent. Therefore, I should say that the process of diversification is already here and we have no plans to slow down.

Now the price of oil goes up. But it will just increase our reserves. We managed to optimize our expenses, and last year still the price was low, but we earned 4.5 billion dollars more, which added to our reserves. That means that even with low prices we will be on the safe side. Our budget of this year is based on 45 dollars per barrel. Therefore, whatever is more than that will go again to the sovereign fund.

But at the same time we should all understand that oil and gas will continue to be the main part of our economy. Though, already today non-oil sector is about 70 percent of our GDP. So, our target is to diversify our exports, to increase the level of non-oil products in our export portfolio.

As far as energy projects are concerned, once again, they are important for us, they are important for the region and the projects, which we initiated, actually change the energy map of the region. The first pipeline we built to Georgia, to the port of Supsa connected the Caspian and Black seas. Then, the second pipeline for crude oil from Baku-Tbilisi-Ceyhan connected the Caspian and Mediterranean. Then, on the same route we built a gas pipeline. Therefore, we have already diversified export routes for our hydro-carbons, at the same time, providing substantially energy security of our partners, including those in Europe. Some countries of the European Union get the biggest part of their oil supply from Azerbaijan, and after we successfully complete the Southern Gas Corridor project, in two-three years’ time they will also get access to our natural gas.

The same I can say about our transportation project, which Mr. Vice Prime Minister referred to. Baku-Tbilisi-Kars changed the transportation map of the region. It is now the shortest route from China to Europe, which will take you about two weeks instead of 30-35 days before that. So this is a new map of transportation, the new map of energy diversification, and Azerbaijan being a landlocked country already managed, I think, to transform into a regional transportation hub. However, we still have to work.

So, future will be not in oil and gas. Oil and gas will come to an end one day. Future is innovation, efficiency, good governance, management, transparency and state support to entrepreneurship.

Moderator: Do you feel that the public is already ready to take advantage of these opportunities whether it’s through education or other measures?

President Ilham Aliyev: Definitely, because one of our main objectives several years ago was to reduce poverty and unemployment, and that was done successfully. The level of poverty in Azerbaijan is 5.4 percent and the level of unemployment is 5 percent. In the last 15 years our population grew 1.5 million people. Therefore, creating jobs for us is a permanent process. Last year we created 177,000 permanent jobs and this demonstrates our policy. Also, oil and gas do not create many jobs. In order to have unemployment low, we need always to look at education, management, agriculture, tourism, services. Therefore, population is ready for reforms, and our reforms were very positively received by the people. They were not painful, because when you do radical reforms at the first stage it is painful for population. So we introduced a very substantial social package for those who still need that state support. Therefore, this was a smooth process, and basically in the coming years we need only to continue what we started two years ago, I mean very deep and comprehensive economic reforms policy.

Question: My name is Andrew Wilson, I’m the Managing Director of the Center for International Private Enterprise. I would like to hear from leaders of the region to get a sense of what they think the role of small business is in diversification of their economy and what they are doing to promote that?

President Ilham Aliyev: We in Azerbaijan have a special fund to support entrepreneurship, and through that fund during the last decade or more, almost two billion dollars have been delivered to the private sector on a very preferential basis, low interest loans, with the recommendations, with the state support to the private sector. Especially, we pay attention to regional development. We implement now the third regional development program, which allowed us to create conditions for small enterprises to do the business. What were the conditions? First, infrastructure. We have built, in 15 years, more than 12,000 kilometers of roads, including village roads, which allow not only easy access to services, but also help farmers bring their products to the market.

The level of gasification in Azerbaijan is 93 percent. Taking into account the mountainous region, I think it’s very high. We transformed from importer to exporter of electric energy. Therefore, we have extra capacity, and extra source. Also every year around 100,000 hectares of land are irrigated by the state. Above from that, our farmers do not pay any taxes, except land tax, and pay only 30 percent of fertilizers and 50 percent of fuel. So, this is the state support to business and this is a substantial support.

Also, there are subsidies to farmers and very good investment climate in Azerbaijan. We have attracted 230 billion US dollars of investments, half foreign, half local, in the last 15 years. So, all that created conditions for the private sector to develop, at the same time, referring to the beginning of conversation.

Very good relations with the neighbors allow us to have easy access to the neighboring markets, which is the main market for our non-oil production. Therefore, the policy of support to the private sector will continue, the level of small enterprises in our GDP is still very low. Therefore, our main target for the coming years will be to create additional conditions for them in order to generate jobs, and generate more profit.

Moderator: President Aliyev, let’s talk about another type of European norm, which has to do with political participation and human rights. It’s argued by many that these are critical not only to the individual human experience but also to economic development, that you can’t have one without the other. How is that plan going in Azerbaijan, which has been criticized on issues like press freedom?

President Ilham Aliyev: I think that this criticism has no grounds because if you look at the substance all the basic freedoms in Azerbaijan are provided, including freedom of press, which is absolutely free. 80 percent of the population of Azerbaijan are internet users, and when internet is free without any censorship, and absolute majority of population are using internet, it’s difficult to talk about restriction of press.

Moderator: But then how can you explain why does Azerbaijan get a ranking of 162 from the world press freedom index?

President Ilham Aliyev: I think that is based on political grounds. It has nothing to do with reality. Again, all the fundamental freedoms are provided and our government has implemented a very important project of bringing broadband internet to every village. Therefore, this classification is based on a very biased approach, sometimes very hostile approach, it is generated in some political centers in the West.

Moderator: Can you be more specific? Where is this hostility coming from?

President Ilham Aliyev: Well, I would prefer not to talk more precise about that. I think it’s clear where it comes from. Why it comes? Why? And the reason is very simple. Because Azerbaijan is a country, which is implementing an independent policy, policy based on our national interests. We do not join any adventure, which is risky and which can create complications for our country. As I said before, we do not have internal risks, we have a stable political and economic situation. All the potential risks, which we may face, may come from outside.

There have been a lot of attempts to drag Azerbaijan into kind of campaigns against some countries. We were always very neutral, we do not play against anyone, and we are not part of any campaign, which is risky and which is not in line with our national interests. Therefore, the main reason for attacks is that some may consider Azerbaijan to be too independent for not a very big country and these kind of ratings of some NGOs aim to discredit our reputation, to damage our reputation, to present Azerbaijan as a non-democratic country, which is not true.

Again, we are talking today about political development and economic development. You cannot separate one from another. In the country, which according to the World Economic Forum`s economic competitiveness index is number 35, I think, it’s a good indicator that the country is free. Davos also issued recently a rating of the public trust in politicians, and Azerbaijan is number 20. In inclusive development index among developing countries Azerbaijan is number three. If all the information, which some NGOs are trying to introduce were true, we wouldn’t have achieved that success. Therefore, we need to look at the substance, at the real situation, and separate political agenda or some expectations towards Azerbaijan from the reality. 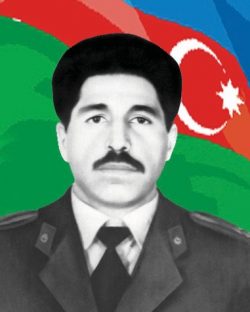