Foreign Ministry: Statement of Pashinyan clearly demonstrates that he is a person far from civilian attitude, the one that speaks about peace and truce in words but rejects fundamental humanism principles in deeds
CEC announces exact number of voters in Azerbaijan
Baku to host first meeting of high-level working group on Caspian Sea issues 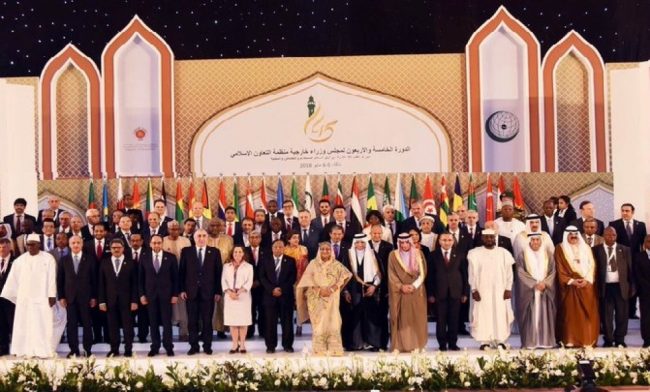 The UN, including its Security Council and OIC resolutions, which clearly recognize Armenia as an aggressor, must be the main message to all Muslim countries that want to develop relations with the invader, Azerbaijani Foreign Minister Elmar Mammadyarov said at the 45th session of the Council of Foreign Ministers of the OIC.

“It is a confirmed fact, that as the result of military aggression by Armenia, 20 per cent of internationally recognized territory of the Republic of Azerbaijan, including Nagorno-Karabakh and seven adjacent regions have been occupied as well as almost one millions of people have become refugees and internally displaced persons,” he said. “Numerous historical, cultural and religious monuments in the occupied territories of Azerbaijan have been brutally destroyed and humiliated. The UN, including its Security Council and OIC resolutions, which clearly recognize Armenia as an aggressor, must be the main message to all Muslim countries that want to develop relations with the invader because Armenia’s policy of occupation is an attack not only on Azerbaijan’s religious and cultural assets, but on historic and cultural legacy of Islam in general.”

“I would like to note with thanks the strong and just position of the OIC member-states with regard to the Armenia-Azerbaijan Nagorno-Karabakh conflict, reflected in the OIC Ministerial resolutions,” he added.

“Azerbaijan is working consistently to promote Islamic values around the world and actively contributed to the organization of the Department of Islamic Arts in famous Louvre museum in France, and was the first Muslim country to demonstrate its exhibition in the Vatican,” he noted. “In 2009, Baku was declared the capital of Islamic culture. In 2018, Nakhchivan, another ancient Azerbaijan city, was awarded this honorary title. The opening ceremony of “Nakhchivan, the Capital of Islamic Culture-2018″ event will be held on 20th June 2018 in the city of Nakhchivan with the participation of the Culture Ministers of OIC Member States.”

The OIC session saw adoption of several important resolutions, as well as resolutions on Armenia`s aggression against Azerbaijan, and the destroying religious-cultural heritage in the occupied lands of Azerbaijan.