Turkish Foreign Ministry: Armenia must put an end to its invasion of Azerbaijan’s territories 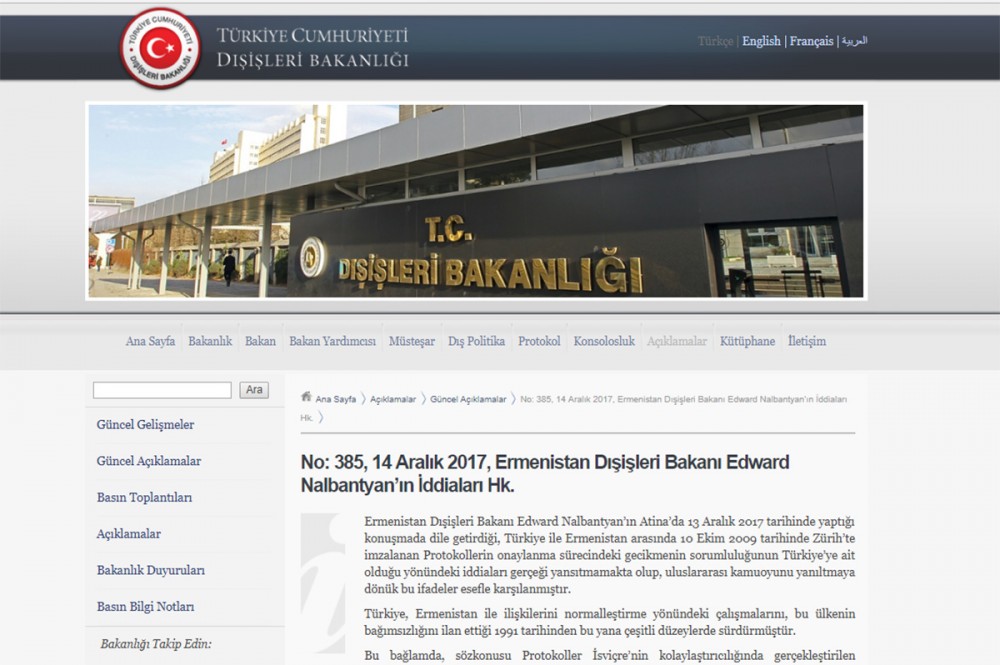 The Turkish Foreign Ministry has issued a statement regarding the invasion of Azerbaijan’s territories by Armenia.

The statement says: “Edward Nalbandian, Minister of Foreign Affairs of Armenia, in his statement during his visit to Athens on 13 December 2017, held Turkey responsible for the delay in the ratification of the Protocols signed between Turkey and Armenia on 10 October 2009. These claims do not reflect the truth and aim at misleading the world public opinion.

Turkey has pursued its efforts to normalize relations with Armenia on several levels since Armenia proclaimed its independence in 1991.

In this context, the said Protocols, aiming to normalize relations between Turkey and Armenia are the result of the negotiations facilitated by Switzerland.

However, the Constitutional Court of Armenia, with its ruling on 12 January 2010 introduced additional preconditions and restrictive clauses that are against the letter and spirit of the Protocols.”

“Subsequently Serzh Sargysyan, President of Armenia, publicly announced on 22 April 2010 that the ratification of the Protocols was suspended. It is a well-known fact that the Armenian diaspora was against the signing of the Protocols from the onset and has been pressuring the Armenian Government not to ratify them,” the ministry says.

“Lately, Sargysyan, in his speech during the 72nd Session of the UN General Assembly on 19 September 2017, made groundless claims blaming Turkey for the delay in the ratification of the Protocols and stated that they will declare the Protocols null and void in the absence of progress and meet the spring of 2018 without those Protocols.”

“Despite Armenia’s negative stance on the Protocols, Turkey is committed to the primary clauses of the Protocols. These Protocols are still on the agenda of the Turkish Grand National Assembly’s Foreign Affairs Commission and for their ratification, it is essential that a favorable political atmosphere and peace in the South Caucasus is secured,” the statement says.

“Turkey’s primary target pertaining to the Protocols process is to realize the normalization of relations between Turkey and Armenia in such a way that, comprehensive peace and stability in the South Caucasus is provided. In this vein, it is necessary that in the settlement of the Nagorno-Karabakh conflict progress is achieved, based on Azerbaijan’s territorial integrity and in light of the relevant resolutions of the UN Security Council. In any case, Armenia must put an end to its invasion of Azerbaijan’s territories.”

“Nalbandian’s claims on genocide in his speech do not reflect the truth either. As ascertained by the decisions of the European Court of Human Rights, the 1915 events are a matter of legitimate debate within the framework of freedom of expression. The attempts of ill-intentioned groups to impose their one-sided narrative and to exert pressure on the world public opinion are morally and legally incorrect and do not contribute to peace and stability in our region. Our expectation from Armenia is that it answers for one of the gravest crimes against humanity in recent history, the Khojaly Massacre, rather than dealing with controversial historical events,” the Turkish ministry said.