Ali Hasanov: We are going to start legal proceedings against organizers and executors of anti-Azerbaijani smear campaigns that were ruled groundless by court 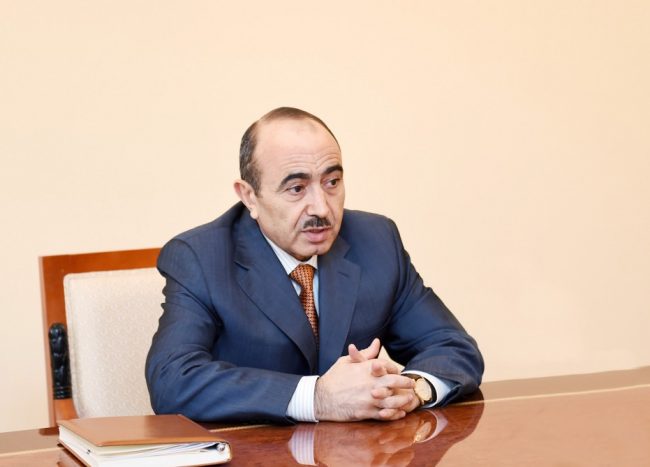 “We are going to start legal proceedings against the organizers and executors of anti-Azerbaijani smear campaigns that were ruled groundless by a court verdict,” said the Azerbaijani President’s Assistant for Public and Political Affairs Ali Hasanov as he commented on the Milan court’s acquitting Luca Volonte, the former chair of the European People’s Party group in PACE, who was accused of having corruption links to Azerbaijan.

Ali Hasanov said that the Milan court’s February 13, 2018 verdict confirmed that the information spread in the middle of last year by the Organized Crime and Corruption Reporting Project (OCCRP), the non-transparent organization pursuing specific purposes, ordered by the known anti-Azerbaijani centers and networks was groundless and biased and aimed to tarnish the healthy international image of Azerbaijan.”

“I would like to note that the anti-Azerbaijani centers and networks with so many fake news wanted to target and condemn both the Azerbaijani state and the well-known people – public and political figures, experts, journalists, and others – who have a friendly attitude to our country and voice positive opinions about it,” Ali Hasanov said.

“It is not a coincidence that the OCCRP’s so-called article “The Azerbaijani Laundromat” was rapidly circulated in the world media, the official authorities of different countries got interested in this issue, and a special investigation was launched against the people whose names were featured in it, including Luca Volonte, the former chair of the European People’s Party group in PACE, who allegedly received $ 2,640,000 from Azerbaijan,” the Azerbaijani President’s Assistant said.

“I would like to remind that at that time we already stated that the allegations made by OCCRP were biased, groundless, provocative, and constituted a part of a dirty slander campaign against Azerbaijan conducted by the known circles. Obviously, the objective investigation carried out by the Milan court has also confirmed this,” he said.

Ali Hasanov mentioned that the Azerbaijani government is well aware of the organizers and perpetrators of such a smear campaign aimed at discrediting the image of both Azerbaijan and its partners, adding that the government does not intend to confine itself only to the verdict of the Milan court.

“We intend to launch legal proceedings against those involved in these activities. Azerbaijan’s appropriate government authorities have been properly instructed. We consider that those who under the guise of democracy and freedom of speech organize campaigns against different states, organizations and individuals at the international level, should realize their responsibility and be held accountable for their actions,” Ali Hasanov said.