An Azerbaijani delegation led by Chairman of the Caucasus Muslims Office Sheikhulislam Allahshukur Pashazade attended the international conference on “Islamic solidarity and contribution of interreligious dialogue to peace and multicultural life” held in Madrid. 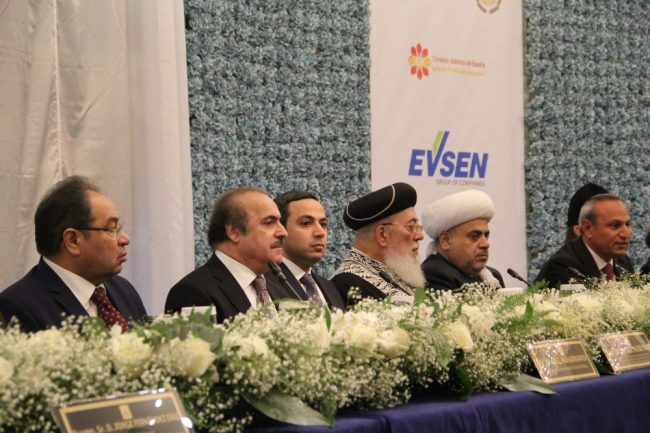 Co-organized by the State Committee for Work with Religious Organizations of the Republic of Azerbaijan, Caucasus Muslims Office, Ministry of Justice of Spain and Evsen Foundation, the conference was part of a series of events held under Azerbaijani President Ilham Aliyev’s initiative to declare 2017 as a “Year of Islamic Solidarity in Azerbaijan”.

In his opening remarks, President of Evsen Group of Companies Ali Evsen noted the importance of the event.

Spanish Minister of Justice Rafael Catala Polo described the conference as a next step towards reinforcing confidence in peace.

Israeli Minister of Social Equality Gila Gamliel mentioned the values that unite people. She underlined that the Israeli government has provided $1 million to those affected by the war in Syria.

Recalling that both the year of multiculturalism and Islamic Solidarity declared by President Ilham Aliyev serve common human goals, Chairman of the Caucasus Muslims Office Sheikhulislam Allahshukur Pashazade said that it is a special and valuable contribution of the Azerbaijani state to the processes developing in the world.

“Being a unique example of inter-religious and inter-confessional solidarity, Azerbaijan has become a well-known traditional venue for global events related to dialogue between cultures and religions. The Year of Islamic Solidarity, which embraces dialogue and cooperation between Islam and other religions, as well as harmony, should be regarded as a great opportunity from this point of view,” Sheikhulislam Allahshukur Pashazade said.

He noted that Azerbaijan recognizes and respects the territorial integrity of all states in the world, including Spain. “As a result of the Armenian occupation of 20% of our territory, our people were subjected to genocide, more than a million of our compatriots became refugees and internally displaced persons, mosques, churches, synagogues and cemeteries were devastated.”

Chairman of the State Committee for Work with Religious Organizations Mubariz Gurbanli said the primary idea of Islamic solidarity is to strengthen mutually beneficial cooperation on the basis of internal stability in Muslim countries.

Azerbaijani Ambassador to Spain Anar Maharramov emphasized the importance of the event.

The participants of the conference signed a Joint Memorandum on inter-religious relations.