Book published about genocide committed by Armenians in Garadagli village

Baku hosted the presentation of a book today about the genocide committed by Armenians in the Garadagli village in Azerbaijan. 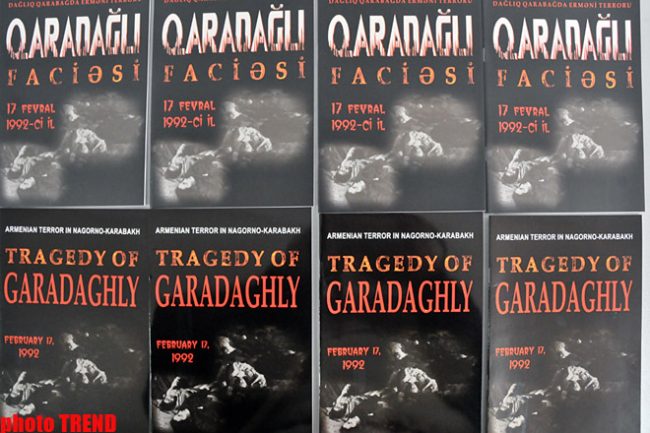 Armenian committed heinous crimes in the Garadagli village, as in the in Khojaly region, Chairman of the Public Association for the Protection of the rights of migrants and IDPs Nadir Abdullayev said.

Association Executive Director, Historian Maharram Zulfugarli said this village has historically been the Turkic lands, and events there should be scrutinized.

On the night of Feb. 16, 1992, Armenian gangs attacked the Garadagli village in the Khojavend region of Azerbaijan, killing and capturing local residents. Forty-seven hostages were taken in Khankendi, where they were subjected to the most brutal tortures for a long period. Garadagli is located between Khankendi and Khojavend. The village had 800 houses.

The conflict between the two South Caucasus countries began in 1988 when Armenia made territorial claims against Azerbaijan. Armenian armed forces have occupied 20 percent of Azerbaijan since 1992, including the Nagorno-Karabakh region and 7 surrounding districts.

Azerbaijan and Armenia signed a ceasefire agreement in 1994. The co-chairs of the OSCE Minsk Group – Russia, France, and the United States – are currently holding the peace negotiations.

Armenia has not yet implemented the U.N. Security Council’s four resolutions on the liberation of the Nagorno-Karabakh and the surrounding regions.