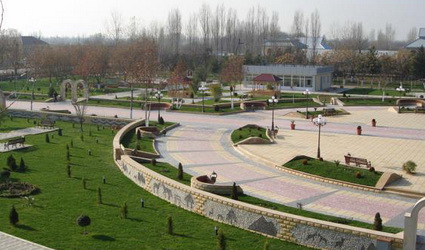 The name of Agjabedi, situated in Mil and Garabagh plains of Kur-Araz Lowland was cited for the first time in 1593 and was an old dwelling of old tribes. The remnants of settlements belonged to the Chalcolithic, Bronze, antique period and Middle Age and various grave monuments are revealed near Agjabedi. Tombstones of sheep form hewed from stone exist in medieval cemetery. Agjabedi is the area inhabited by Kebirli, 32 the support of Garabagh. The village names connected with the names of that tribes still valid in the site settled by old tribes. The name of Kabirli Village is associated with the name of tribe of Kabirli of Garabagh. The name of Shahseven Village arranged voluntary guards to weaken Gizilbash tribes by I Shah Abbas in 14th century and gave plot shares to them. The grounds kept their old names up to now. The name of Shahseven Village of Agjabedi is associated with Shahsevanguards. The name of Agjabedi village is cited in the content of Bayot region subordinated to Barda Liva in the detailed history document of Ganja-Garabag in 1727. In Boyad Village of Agjabedi region Panahali khan built Bayot Fortress in 1747-1748.  Haji Chelebi attacked Boyad Castle in 50s of 18th century but could not seize it. Afterwards Panahali khan decided to build another castle since Boyat Castle located in plain. According to information of year of 1823, Khalfaraddin Village located in lower part of Agjabedi later was combined to Agjabedi and the latter was called Khalfaraddin. Agjabedi was given region status due to administrative division upon dividing the area of Azerbaijan administratively by Soviet power in 1930 and in 1963 was liquated and surrendered to Aghdam region. The area of the region is 1756 km2, population is 117500 people. The region broke up from Aghdam in 1965 and gained region status again.

Kur River flows across the region’s northern-eastern border, while from the central part Gargar River flows. Yukhari Garabagh channel goes through the region area. There is a salty lake inside. There spread gray-grass, gray and grass-gray soils. In the central part there encountered salty and saline grounds. The plants are of field and semidesert type. Shrubbery and sparse Tugai woods exist on the bank of Kur River. Animals: gazelle, wolf, pig, jackal, fox, beaver swamp, badger, rabbit, Asia Minor mouse. etc. Birds: partridge, pigeon, pheasant, etc. Aggol (translated ‘white lake’) National Park is located in the area of Agjabedi region. 15 kinds of animals, 20 kind of fish and 40 kinds of plants were fixed. Agjabedi region is specified with poor forest area. Total capacity of forestry of the region is 5933 ha., the site covered with photo is 1355 ha.

Historical, architectural and art monuments exist in the area of Agjabedi region. Thus, there are remnants of the Chalcolithic, Bronze, antique and medieval settlements in the region.