Presentation of public report on the project “Sarsang – Prevention of Humanitarian Catastrophe” in Yevlakh region
Foreign Ministry: Number of IDPs and refugees in Azerbaijan exceeds 1.2 mln
Foreign Ministry: Statement of Pashinyan clearly demonstrates that he is a person far from civilian attitude, the one that speaks about peace and truce in words but rejects fundamental humanism principles in deeds 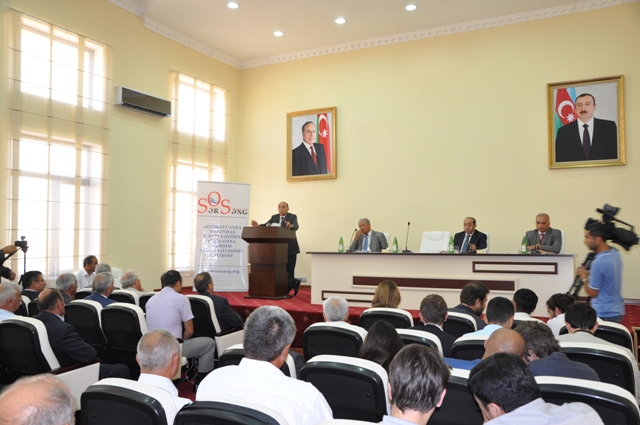 International conference entitled ‘SOS Sarsang’ over the project ‘Sarsang – prevention of humanitarian catastrophe’ was held by Association for Civil Society Development in Azerbaijan (ACSDA) in Youth Centre of Tartar City on 7th September, 2013.

AzerTAg reports that the president of ACSDA, MP of Milli Majlis Elkhan Suleymanov spoke at the conference about the purpose of this project.  He noted that technical devices and equipments were fallen into catastrophic situation remained neglected for Sarsang Water Reservoir’s occupation over 20 years in 1976. Thus, the water reservoir is supposed to be destroyed because of natural disaster, technical or sabotage reasons. The project aims at attracting world community to dangerous situation of Sarsang Water Reservoir of virtual importance for population of surrounding regions and international organizations to urge Armenia to give control of the water reservoir and relative irrigation systems to Azerbaijan in conformity with international resolutions.

The head of Tartar regional Executive Power Jeyhun Jafarov expressed gratitude to the participants of the project and organizers and talked about the harm made with the occupation of Sarsang water reservoir to the region. He noted that before the conflict the sown areas of the region were irrigated mainly via Sarsang Water Reservoir. The Armenian side which seized control over the water reservoir as a result of the occupation opens water willingly and the grounds stay under the water. The water is intercepted in summer when the people and economy needs water. Consequently there appears problem with water and the region economy is damaged a lot.

The report of Doctor of Political Sciences, Ramiz Sevdimaliyev on “international legal aspects of the result and risks of Sarsang water reservoir”; Doctor of  Economic Sciences Chingiz Ismayilov “Impact of Sarsang Water Reservoir onto lowland Garabagh”, project coordinator Samir Isayev “harmful influence of non-regulated activity of Sarsang water reservoir to environment”, the chief of head department of infrastructure development of Ministry of Emergency Situations Tariel Husseinov “possible discords of catastrophe to happen in Sarsang Water Reservoir”, Doctor of Legal Sciences Kamil Salimov “the experience of elimination of humanitarian threats and results happened in the world-international legal aspects” were heard. There was mentioned that the reservoir of 125 meter dam and 560 million cube meter water capacity became currently a large danger source for Azerbaijan. The accident to occur as a result of sabotage, technogenic, or natural disaster can cause great human cost, and humanitarian disaster in the region along with ecological crisis. On the other hand intentionally flow of water from the reservoir or its cease damage hardly the region’s agriculture, desert of the soils, creates hard ecological and social problems. Aggressor Armenia must bear  responsibility for all of these.

The web-site ‘www.sarsang.org’ was presented at the event.