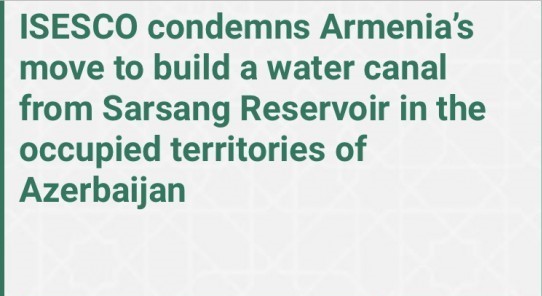 The Islamic Educational, Scientific and Cultural Organization (ISESCO) has issued a statement condemning Armenia’s move to build a water canal from Sarsang Reservoir in the occupied territories of Azerbaijan.

The statement describes the Republic of Armenia’s move to build a new canal from the Sarsang Reservoir which is located in Azerbaijani territories occupied by Armenia as a flagrant violation of the international law since the construction of such canal will cause floods in winter and droughts in summer in lower Karabakh and the adjacent regions of the Republic of Azerbaijan, and endanger the safety and security of their populations.

ISESCO Director General Abdulaziz Othman Altwaijri said that Armenia’s expansionist plan aims to alter the situation in the occupied territories of Azerbaijan and loot the natural resources of the Republic of Azerbaijan, ISESCO Member State. He further qualified it as a violation of private and public property rights and of the international law, namely the Fourth Geneva Convention which calls the “occupying power to provide protection to civilians in the territories under occupation”. ISESCO Director General called on the international community and the international human rights organizations to act swiftly to force Armenia to give up its expansionist plan that is designed to promote its economy through exploiting Azerbaijan’s natural resources and continue its policy of ethnic cleansing, and urge it to immediately withdraw from the Azerbaijani territories it occupies to protect international peace and security in this important region of the world.