Thirty countries amended regulations on presidential terms in recent past

Veronika Kotek: “Moscow Declaration is a confirmation of commitments undertaken by Azerbaijan and Armenia in the Council of Europe”
Council of Europe designed draft Action Plan on Azerbaijan: representative to CE
Azerbaijan to become significant figure in energy security: Program Director at Diplomacy Academy

Thirty countries amended regulations on presidential terms in recent pastTrend News interviews Social Research Fund President Rashad Rzagulyev
Question: How will the proposed amendments to the Azerbaijani Constitution facilitate democratic development in Azerbaijan?
Answer: I am confident that the proposed amendments to the Constitution are vital and required urgently. I see these amendments as a crisis chip inserted into the matrix of the nation-state system to make sure the country remains stable and immune to problems plaguing the international community. We do not need any additional proof that civilization is not experiencing the best of times.
Q: A number of international institutions are skeptical about the idea – to put it mildly. Why?
A: There are plenty of reasons. The strangest thing is Azerbaijan has achieved success by acting contrary to the advice of the international democratic syndicate. I do not doubt that the world’s democratic oligarchs are altruistic and ponder the fate and welfare of the Azerbaijani people. But we make our own decisions with our own safety in mind.

It is clear that democratic development is unique to every country.
It is impossible to repeat with mathematical accuracy the path that the U.S., Britain, Russia, Turkey and Malaysia took. They found their own way and no one has the right to demand that Azerbaijan take the same path. Civil society in our country is mature enough to know what we need.
Q: Opponents of the referendum cite international experience and say permanent staff must be rotated in the upper echelons of the government.
A: Democracy is not a dogma. It is effective in progressive and dynamic development. Democracy must have a nation-state identity. Otherwise, democracy risks becoming a major geopolitical weapon.

We are witnessing a strange situation. The countries and international institutions that make demands to our nation are ignoring this for the sake of their own national interests.
Q: Could you give us some examples?
A: There are plenty of examples. The U.S. is one. Under a law passed in 1933, the New York City mayor can only be elected to office two terms. But in late 2008, the City Council met and decided New York City Mayor Michael Bloomberg could run for a third term. The decision was made even without the slightest hesitation. Why should the city’s population be ignored? Where are all the hysterics about the city’s founding fathers? No one is bothered in the least. Why? The answer is simple and was voiced by New York City Council Speaker Christine Quinn on Oct. 13. She said on the backdrop of the global financial crisis the people of New York City should have the right to choose.
Here is another example. In early January, U.S. Congressman Jose Serrano suggested scratching the limits on presidential terms. This was not the first such suggestion to be made in the U.S.. There is a logic and need for these actions. Democracy is the right to initiate legislation – not a hardened mass of Communist ideas.
I have deliberately cited examples from modern U.S. history. But in the last decade, roughly 30 countries have revised their regulations on presidential terms by adapting them to the interests of their nation-state.
Q: Is the global financial crisis the reason for this initiative?
A: The public initiative on amendments to the Constitution is positive as it puts the voting rights of Azerbaijani citizens first and foremost. Now with regards to the crisis…

The crisis spans the whole world. It has placed many nation-states on the brink of collapse and negatively affected the populations of those countries.
I think that in addition to the financial crisis, other global crises are developing. These are socio-humanitarian and international legislative crises threatening security. The world has entered into a period of crises and chaos.
Azerbaijan is an integral part of the international community. Naturally we must push through these crises and do so with strong and authoritative leaders.
Although our officials argued that the crisis would leave Azerbaijan unscathed, the facts and statistics prove the opposite. Azerbaijan is part of the international community and worldwide trends cannot be wholly avoided.
Personally I will vote for the referendum to amend the Constitution. I will vote for Ilham Aliyev. /Trend/ 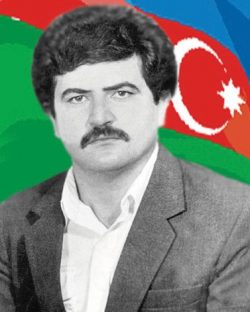