Election campaigning time-frame shorter in some European countries than in Azerbaijan
Event titled ‘From Garadaghli to Khojaly’ held in Baku
Azerbaijan Technical University hosts meeting on White House petition on Nagorno-Karabakh
The Association for Civil Society Development in Azerbaijan (ACSDA) launched on April 7 a petition titled “Establish justice and prevent a great catastrophe”. 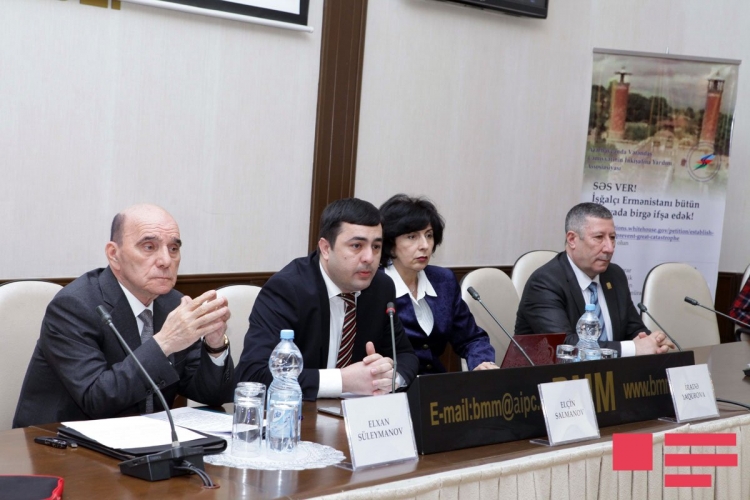 The petition notes that PACE Resolution 2085 stresses the fact of occupation of Nagorno-Karabakh and other territories of Azerbaijan by Armenian state; requests the immediate withdrawal of Armenia’s armed forces from the occupied region; regards the deliberate creation of environmental crisis against Azerbaijan by Armenia as an environmental aggression; warns that current state of Sarsang reservoir, located in the occupied Azerbaijani territories, could result in a humanitarian disaster.

Elkhan Suleymanov said at the press conference Thursday that the petition also asks the Obama Administration to support PACE Resolution 2085, to assist in the liberation of the Azerbaijani territories occupied by Armenia and the prevention of a humanitarian catastrophe in the region. In order to receive a response from the White House, the petition requires 100,000 signatures in 30 days.

Suleymanov said the petition has been already signed by 8,300 people, noting that the ACSDA launched a PR campaign to inform the Azerbaijanis living around the world and the Turkic world about the petition. It is planned to hold numerous events and meetings, distribute informative materials and carry out other activities within the framework of the campaign.

Suleymanov urged all to take an active part in the information war. “We have defended our lands from provocation. We should prevent the dissemination of false information. A great victory of our armed forces and the liberation of the strategic heights showed that Azerbaijan won’t stop the struggle for the liberation of its lands. The efforts taken by international organizations to make people forget our lands have been failed. The successes achieved in the two-day war give Azerbaijan new impetus at the negotiating table. The results of the OSCE Minsk Group co-chairs’ activity are obvious. They revisited our country and said the negotiations will become intensive. However, now the whole world knows that Azerbaijan has run out of patience and can no longer tolerate injustice,” he added.

He also mentioned the statements issued by Turkey, Pakistan and Belarus, which reflect the necessity of protecting Azerbaijan’s territorial integrity and liberating the occupied territories.

With regard to international organizations, Suleymanov said only the statements issued by the Organization of Islamic Cooperation and PACE President Pedro Agramunt envisages the need for the liberation of Armenian-occupied territories of Azerbaijan.

“Statements of UN Secretary-General, President of the European Parliamentand leaders of the OSCE co-chairing countries express support for the activities of the MG co-chairs, call for the resumption of a ceasefire but lack a requirement for an immediate withdrawal of Armenian forces from the occupied territories. Doesn’t Azerbaijan want peace? These calls, lies and slanders are aimed at making us forget our lands.  We must expose this insincere attitude towards Azerbaijan. To this end, this petition is very important. What is preventing our army from liberating the occupied territories within five days? The reason is that we couldn’t achieve the recognition of Armenia as an aggressor worldwide. Therefore we should do our utmost to win the information warfare,” he concluded.

The petition is available in the following link: