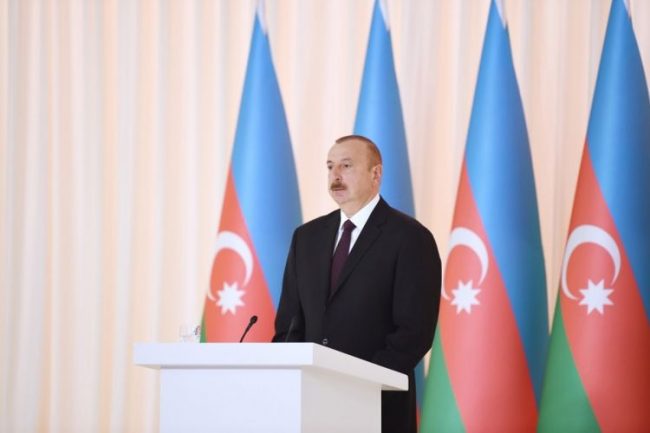 ‘Work done on the Nagorno Karabakh conflict during recent years enhanced the legal base for settlement of the conflict. UN SC four resolutions, OSCE decisions are the ground for this legal base’, said Azerbaijani President Ilham Aliyev.

The president made the remarks at an official reception on the occasion of the 100th anniversary of the Azerbaijan Democratic Republic at the Heydar Aliyev Center in Baku on May 28, APA reports.

The head of state noted that other international organizations have also been making similar decisions and resolutions since 2003. Among them are Non-Aligned Movement, PACE, European Parliament, Organization of Islamic Cooperation (OIC), GUAM, ECO and others: ‘This means creation of legal base for settlement of the conflict. We have also created an economic ground for settlement of the conflict, formed a strong army. As a result of complex measures, Azerbaijan has provided political and diplomatic supremacy. Therefore, no country recognized Nagorno Karabakh regime despite Armenia’s efforts.

We know that norms of the international law are violated in many cases. Factor of power prevails and this is reality. Therefore, support by world community to our position on the Nagorno Karabakh conflict is our achievement. We managed to build a strong state. We are respected. In such a condition, no country can establish relations with an illegal regime and we won’t allow for building of the second Armenian state in our lands. Only way for Nagorno Karabakh conflict settlement is restoration of Azerbaijan’s territorial integrity’.