Speech of Tariyel Huseynov, Chief of the Head Department of İnfrastructural Development of the Ministry of Emergency Cases, at “Sarsang SOS ” international conference in Tartar on September 7, 2013

ACSDA to deliver the truths on Garadagli tragedy to the world
“Daily about the project of Serseng “- preventing of the humanitarian catastrophe
Speech of Chingiz Ismayilov, Doctor of Economic Sciences, ACSDA’s expert, at “Sarsang SOS ” international conference in Tartar on September 7, 2013 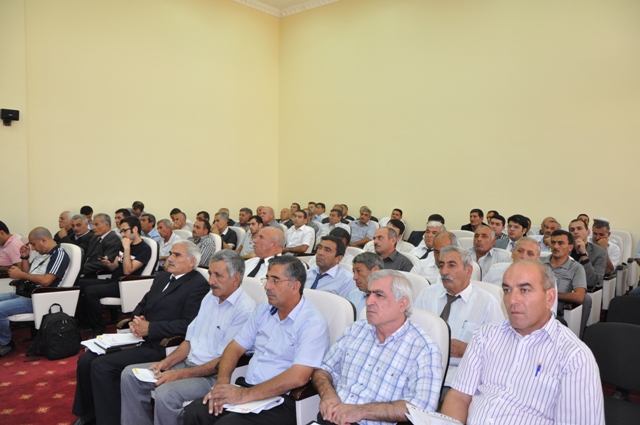 Economic, political and environmental aspects regarding with the problems emerged around Sarsang water reservoir have been touched upon in this conference. As a representative of the Ministry of Emergency Cases I would like to speak about the dangers, which could be emerged around Sarsang water reservoir from the point of view of technical danger.

I would like once more to remind that perhaps a part of participators have participated in the construction of Sarsang water reservoir. However, it should be mentioned that this reservoir is one of the most complicated water reservoirs in the world because of its either geographical location or geological structure.

Why? Because, territory where the reservoir is located is very high from the hypsometric point of view, an approximate height of the dam is 740 meter and in a very short distance, so in 48 kilometer of the dam and Barda city, it is increased on gradient, it gradient is 620 meter cube, it means this always increases probability that a result of aftereffects to be emerged in dams located in very high areas. Therefore, technical examinations, reviews to such reservoirs are considered actual. I would like to mention that, control on activity of water reservoirs as hydro technical constructions, especially hydropower stations on such reservoirs is one of the directions of the activity of the Ministry of Emergency Cases.

State agency for safe work in industry and mountain-mine control is active within the ministry. One of the main activities of the agency is to make state register of state buildings of strategic importance and at the same time state register of potentially dangerous buildings. Register means that a list of such buildings has been made and they are periodically examined. In case of any defect, urgent measures are made in order to ensure this defect from the point of technical safety.

We examine all water reservoirs, the revealed defects are timely overcome, however, we haven’t been able to hold such event in Sarsang water reservoir for 22 years. As we can’t achieve this purpose and have no chance to make examinations, have developed such presentation. As Azerbaijan has no program, we have developed program together with our Turkish colleagues, used their program and developed such presentation, in case if any event is happened in Sarsang because of any reason, to know the aftereffects. There are many water reservoirs in Turkey, these issues, ensuring their technical safety is treated sensibly..

Generally, on one hand, as in all other locations, in Azerbaijan seismicity in water reservoirs is considered one score more than the close territories. So, probability of earthquake in this area is more than other small territories.

On the other hand, as mentioned here, this is a building built in 1976 and so far has been under exploitation, its technical resources have been overused and as it has been decayed naturally, we think that emergency situation in higher level is expected here.

The third reason – as this reservoir is located high, it gives chance to our repulsive neighbors and danger of using this chance is very high.

Briefly, we developed presentation, if such event is happened, how can be its result of any reason? Three parameters were used there: water speed, water height and territory filled up with water. If the dam is collapsed, what territories and how will be filled up with water and what is the time frame for this and what will be its impact there?

Water of Sarsang water reservoir flows 17 kilometer through Tartar river valley. As the water basin is mountain and its kinetic energy is increased, there is a probability of speedier flowing instead of speed decreasing after flowing from the water reservoir and according to this program, water probably may overcome 48 km distance within 60-70 minutes and not flood but water spreading zone may occur about 30 thousand hectare close territory. We can come to such conclusion as a result of the presented program.

This presentation specifies what living settlements firstly will remain under the water. İn brief, height of water flowing to Barda city within 60-70 minutes could be 40 cm and its 17-kilometer may flow within less than 10 minutes. We tried as much as possible to create animation film. All they were included to the program and rarely mountains, water valley and river valley in the form of relief were included, it is also shown what area and how is filled up with water after flowing and finally such map is drawn. Again in case of such emergency, water flows from water reservoir to the basin of Tartar River, later to the plain, from plain to the villages of Tartar region and perhaps depending on relief a part of water flows to the north direction and takes its way between Tartar and Barda. You can see that such big area is filled with water. These areas are filled up with water in disruptive manner. It collapses all infrastructure buildings. All the details, including passing speed per kilometer, period of passing, what area is collapsed, are described in this table and this presentation.

Briefly, I consider that, we support position of Mr. Elkhan Suleymanov as a citizen much and constantly cooperate with him. He presented this project, made presentation in Europe and called us happily from Europe, later we presented and resolution on this issue may be adopted. We think that, if necessary, we will work hard on this material, but we consider that it was developed according to the adopted standards and technologies and in case of necessity we can use this program. Thanks for attention!