Elkhan Suleymanov: “International conference will be held in Tartar regarding current status of Sarsang reservoir” 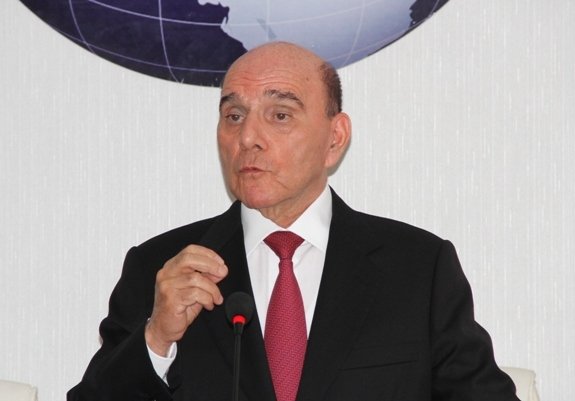 “The Armenian side has a shrewd idea such as the joint use of the Sarsang reservoir and are trying to present it as an integral part of the project to peace prepare for civilian population on both sides” “
In early September, international conference will be held in Tartar regarding current status of Sarsang reservoir, which is under Armenian occupation” Azerbaijani community is recently concerned about Sarsang water reservoir, which is located in the territory of Azerbaijan and is under Armenian occupation, and its current and possible negative consequences. The problem is on the agenda of the country’s and world media for some time. The Association for Civil Society Development in Azerbaijan (ACSDA) realizes a project on Sarsang reservoir. Thus, we’ll discuss the issues interesting for us with our interlocutor Elkhan Suleymanov, President of ACSDA, Member of Parliament from Shamakhi and the project manager of the above-mentioned project.

– You held a press-conference in May, where you stated that the ACSDA launches the realization of wide-scale project on Sarsang reservoir. Could you please inform us about the reasons why the project came to the agenda and its purpose?

– 20% of our territories, including Nagorno Karabakh and 7 surrounding provinces, have been occupied by Armenia for about 25 years. There are facilities of strategic importance in our occupied territories, and Sarsang dam is one of them.

Sarsang reservoir is in an emergency condition due to lack of maintenance as a result of occupation. Thus, the reservoir is very likely to collapse due to natural disaster, technical and deliberate diversion. Therefore, Sarsang reservoir has currently become a source of serious threat for Azerbaijan; this threat gradually becomes real.

The main canals from Sarsang reservoir supplied water to farmlands in the plains of seven provinces of Azerbaijan before armed Armenian aggression and occupation. The occupation deprived of these bordering provinces to enjoy water from this reservoir. Obviously, any diversion,  technogeneous or natural disaster may lead to ecological crisis, mass casualties of civilians, and a new humanitarian catastrophe. Imagine that the current status of Sarsang reservoir poses constant danger to the lives of 400,000 civilians, and these people have become the hostage of this dangerous situation.

On the other hand, the aggressive state opens the water from Sarsang reservoir in winter; thus, the lands are flooded, and roads erode. And  in summer when people and agriculture mostly need water, they stop the water. Consequently, agricultural production of Azerbaijan was seriously hampered, problems arose in the irrigation of farmlands, greenery dried, persistent processes occurred in biological structure of the land, and serious ecological tension emerged in the region.

Unfortunately, Azerbaijani community did not draw attention to the status and consequences of Sarsang reservoir for a long time, and international organizations did not bring this issue into the agenda. Thus, ACSDA launched a large project for the elimination of this gap. The purpose of the project is to aware both Azerbaijani society and the international community about the status of Sarsang reservoir, possible humanitarian catastrophe, biological and ecological crisis, as well as damage to the economy of these 6 provinces for 22 years, to achieve the  adoption of relevant documents in international organziations, to prepare package of activities for the prevention of possible humanitarian catastrophe and ecological crisis, etc.

– It is more than two months and half that the project was launched. Which measures were taken on the framework of the project within this period?

– Some organizational measures were taken. As a first phase, the plan of the project was worked out, working group was formed, division of labor was carried out, and the working group was provided with office, and necessary equipments, including computers, cameras, etc. The project coordinator visited Tartar, Aghdam, Barda, Yevlakh, Aghjabadi, Goranboy, which mostly suffered from the occupation of Sarsang dam, held meetings with heads of executive power of these provinces and relevant officials. Moreover, regional office of the project was opened in Barda, and project coordinators were appointed for all provinces.

In order to receive official data and establish joint activities, we have got in contact with several ministries and state committees of our country, sent letters to the Ministry of Emergency, Ministry of Agriculture, Ministry of Ecology and Natural Resources, Amelioration and Water Industry JSC, State Statistical Committee and other institutions and held several meetings.

Discussions were held on creating website of this project, model of page was made and put on the internet, domain and hosting of website was bought and menu was formed. Now website materials are being collected. The website of project will be presented at the international conference to be held in Tartar, on 3rd of September of this year.

We constantly inform public about ongoing activities through mass media. By the way, our activities in this sphere are not limited with only Azerbaijan, but more than 3 thousand international mass media outlets have published articles on Sarsang reservoir and its humanitarian danger in English, German and French.

Draft resolutions covering possible humanitarian catastrophe that may be caused by Sarsang reservoir were sent to international organizations, as well as to the Council of Europe, European Parlaiment and Euronest Parliamentary Assembly. With our direct initiative and organizational activities, the issue of Sarsang water resorvoir was thoroughly discussed in two international conferences held on 10th of June of this year in Vienna moderated by Alfred Gusenbauer, former Chancellor of Austria and on the “XI Annual Conference of Parliamentary Network on World Bank and International Monetary Fund” with the participation of 269 influential parlaimentarians from 79 countries.

– Could you inform us about future activities within the project framework?

– The scope of upcoming project activities is very wide, it is getting wider during the process and we face with the new challenges. That is why we decided to conduct those activities step by step. Therefore, I am going to inform you about our upcoming activities in a month.

During the indicated period, project participants will visit the region, conduct photo and video shooting on the ground and interview inhabitants and local experts regarding the problems they face due to the occupation of Sarsang reservoir and damage that has been done to the agriculture.

Moreover, in the coming days, discussions are planned to be organized about the collaboration with the representatives of international organizations in our country and embassies of several states. Works on the estimation of material damage to Azerbaijan during 22 years of occupation of Sarsang water reservoir and researches on humanitarian, ecological and biological catastrophes have been launched.

Finally, in the early September, ACSDA will hold a conference in Tartar on the current state of Sarsang reservoir. 3 foreign experts along with  local ones will report in the conference. I would like to particularly stress that not only local media representatives, but also well-known foreign journalists from numerous Western European countries will attend the conference and we will achieve wide coverage of opinions voiced at the conference in the international media.

– I think that there is no sensation. Vice versa, we have to think about which processes have forced the representative of occupying regime make such an offer and about the merits of this proposal. In this regard, we have carried out a specific work.

I should mention that we have elucidated a wide range of problems in the world media, international organizations, as well as currently we endeavor to the adoption of appropriate decisions in PACE and Euronest PA.

I would also like to note that during spring and summer sessions of the current year, a group of MPs in PACE two times made the initiative on adoption of the document on the Sarsang reservoir under Armenian occupation. Despite the preparation of the document, the geography and quantity of MPs that have signed it were in full compliance with the rules, PACE administration deliberately prevented those documents from the discussions. During the spring session of the Parliamentary Assembly of the Euronest the same draft document signed by a group of MPs was presented. However, as a result of the efforts of some of MEPs and political factions this document was also removed from the discussions. In spite of all this injustice, on my initiative a new draft document on Sarsang reservoir signed by 45 MPs representing 18 European countries was submitted in PACE on June 25. This document will be tabled in PACE in autumn and have been posted on the official website of the organization.

Thus, how it is tried to openly retain aggressive Armenia under the umbrella in PACE, to protect it and to hide its international legal responsibility, they understand that, we are right and persistent in our demands. Therefore, they understand that it will not be possible to prevent all the consistently submitted documents in PACE.

They at the same time, take into account the factor that aggressive Armenia chairs the Committee of the Council of Ministers of the Council of Europe at the moment. As well as it is understood in PACE that the prevention of initiatives of PACE members the majority of which are from Western Europe countries in violation of the rules of procedure will seriously blow to the international image of the organization and will cause bustle that will lead to great impact.

It seems that the situation was explained to the aggressive state in PACE and it was informed about the impossibility of preventing the problem. For this reason, representatives of the occupying state make a new trick. Most likely with the support of international organizations they have a shrewd idea such as the joint use of the Sarsang reservoir and are trying to present it as an integral part of the project to peace  prepare for civilian population on both sides. This artfulness of the aggressive side follows the purpose of damaging the international reputation of Azerbaijan and forming opinions in the world community that it is supposedly a non-constructive state. Instead of the liberation of our territories with this Armenia stealthily makes efforts to present itself as a peaceful state in the international community.

Bringing up of the ugly and sinister proposal of occupying state, has appeared after the initiative of submission of the draft resolution in European Parliament, Euronest and PACE and removal of this problem. Within about 25 years, international organizations supporting occupying state instead of applying sanctions on aggressive Armenia for the liberation of our lands, are still making efforts to help the aggressor with so cunning and disgusting ideas. We should seriously think about it.