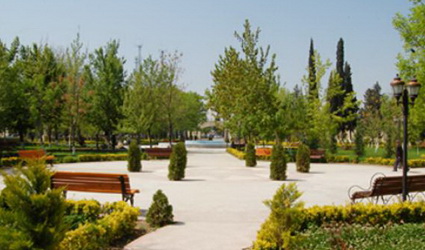 Goranboy – region in Azerbaijan. Distance between Goranboy region and Baku is 317 km.

Central part of the region is Goranboy town. Old Shatal fortress is located nearby the town.

The city developed one time was situated over the caravan road between ancient Ganja and Barda cities. Albanian annalist Musa Kalankatli noted in his “Albanian history” book that the region was on the same level with Shatal Shaki, Shamakhi, Shabran and Shamkir. Kurekchay treaty was signed on 14 March 1805 between Russia and Garabagh khanates on the bank of Kurechay River flown across the region and Gulistan treaty was signed on 13 October 1813 between Russia and Iran in Gulistan village of the region. Goranboy region was created for the first time due to 8 August 1930 decision of Azerbaijan SSR Central Executive Committee in connection with administrative area division and regions establishment. The central part is Goranboy village. The name of Goranboy region was transformed to Gasim Ismayilov due to 8 September 1938 decision of the republican executive committee. Location of two regions at the same zone under the decision of Supreme Soviet of the Republic of Azerbaijan dated 12 February 1991 was considered unnecessary, Shaumyan (village) region was liquidated and the former name of the region given back, consequently Goranboy region was established. The people of Goranboy region fought heroically during Garabagh war, 288 people became martyrs, 9 people were awarded title of National Hero of Azerbaijan.

There exist 2 towns, 6 settlements and 79 villages in the region. The region is located in north-east foothills of Lesser Caucasus and the surface is mountainous and plain descending north part.

Southern and southern-western parts are covered with north slopes of Murovdag range. The northern part of the region is surrounded by Bozdag along the shore of Mingechavir water reservoir. There spread in the area sediments of Paleogene, Neogene and Jurassic-Cretaceous periods. The geological development history of the area is formed within two distinctive large tectonic zones.

Great gulfs occurred in the south as a result of destructive activity of 7-9 magnitude earth-quakes in north-west slope of Murovdag peak  and eastern slopes of Kapaz.

Height from the sea level in the region’s north is 50 m, whereas the highest peak –Gamish Mountain of Murovdag is 3724 meter.