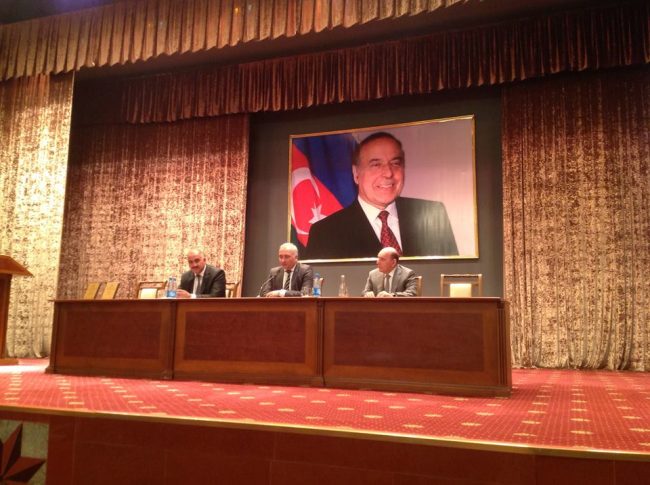 Namig Suleymanov, deputy head of the Yevlakh City Executive Power, thanked to the organizers of the project and the participants of the conferencein his speech and told about the damage of the Sarsang reservoir to the region due to the Armenian occupation.

Participants were informed about the competition on the topic of “Call of Sarsang” among the young artists and journalists, and the winners were rewarded.

Samir Isayev, project coordinator of “Sarsang-SOS” told that Sarsang water reservoir established in 1976, has not been maintained for 20 years since the Armenian occupation, and is in the state of emergency due to the lack of the maintenance. That’s why the reservoir is at great risk of destruction due to the natural disaster, technical or deliberate sabotage. The main objective of the project is to draw the attention of the world community to the emergency situation appeared in the Sarsang reservoir and its possible collapse, and the threats to the lives of the inhabitants living in neighboring unoccupied regions. Now, the work on the evaluation of the damage to the frontier regions of Azerbaijan due to the continuing occupationby the armed Armenian forces is in progress.

Elkhan Suleymanov, President of the ACSDA, MP of the National Assembly, spoke on the topic of the “importance of raising the awareness of the international community about the current situaton in the reservoir and its possible threats”. He said that the Bureau of the Parliamentary Assembly of the Council of Europe (PACE) considered the motion for resolution “The inhabitants of frontier regions of Azerbaijan are deliberately deprived of water”in Strasbourg. The proposal to refer this motion for report to the Committee on Social Affairs, Health and Sustainable Development was unanimously adopted by the Bureau of the Assembly. This decision was ratified by the plenary session of the Assembly, right after the Bureau meeting.
The motion draws international attention to the more than 400.000 Azeri citizens, living in six frontier regions of Azerbaijan (Aghjabady, Aghdam, Barda, Goranboy, Yevlakh and Tartar), who are facing daily serious humanitarian, economic and environmental problems due to an acute lack of water.
It was noted, there is finally an opportunity for Azerbaijan, through the upcoming PACE report and resolution on the Sarsang reservoir. If the truth about the situation will be written in the report, and we will make sure it will be the case, this report might become a historical document.
At the end of his speech, ElkhanSuleymanov announced the start of the song contest called “Call of Sarsang”.
AGRESSION OF ARMENIA AGAINST AZERBAIJAN 220 SARSANG 58
Newer Post
Regional meeting on the project “Call of Sarsang” was held in Yevlakh
Older Post
PACE spring session to discuss draft resolution on Sarsang water reservoir